He presses Malaysian PM on disputes between the 2 countries

Mr Darrion Mohan, a second-year history and politics undergraduate, began by saying that Singapore and Malaysia were "again embroiled in an unnecessary and potentially internecine maritime dispute", referring to the Johor chief minister's recent intrusion into waters off Tuas.

He then asked Tun Mahathir, who had earlier given his address at Britain's prestigious debating society, the Oxford Union, if any action would be taken against the chief minister.

Dr Mahathir did not immediately answer Mr Mohan's questions, and instead asked if he was a Malaysian.

Mr Mohan then sought to bring the discussion back to the issues he raised, listing the Singapore-Kuala Lumpur high-speed rail project, the airspace dispute over Seletar Airport, the proposed "crooked" bridge between Johor Baru and Singapore, calls to revise water supply prices and the maritime dispute as indicators that Dr Mahathir wanted a return to the "fraught relations with Singapore" seen during his first stint as premier between 1981 and 2003.

Dr Mahathir responded by saying that the 1962 Water Agreement between the two countries was unfair to Malaysia.

On the maritime dispute, Dr Mahathir confirmed that "the Menteri Besar went without our permission", adding that "he thought it was Johor waters, that's why he went there".

Despite his questions not being fully addressed, Mr Mohan graciously surrendered the microphone to someone else to ask questions, but not before clarifying that the waters were not neutral and were Singapore's according to a 1979 map that Malaysia had tabled.

"But the fact is that Singapore was a part of Malaysia before. It is our country," he said. "Normally, when a country decides to decolonise, the land goes back to the owner of that land, to the country that owns that land, that happened to Hong Kong and Macau and other places."

Dr Mahathir added: "But in our case, we find that people in Singapore are not compatible with the people in Malaysia. They have a different viewpoint, different ideas about how a country should be ruled, so it is for that reason that they were asked to leave Malaysia, and I think it was a wise decision at that time." 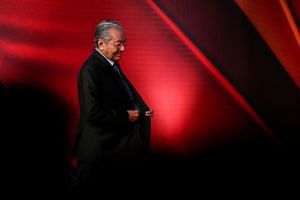 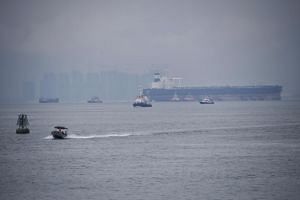 Dr Mahathir, the first Malaysian and Asean leader to be invited to address the Oxford Union, had earlier defended Malaysia's record on democracy and his past leadership in his speech.

He spoke about Malaysia's politics and the general election last May which led to a change in government for the first time in its six-decade history.

"The election system in Malaysia is proof that we are a democratic country," the Prime Minister said in his address, which was carried live by Astro Awani.

"In terms of the people selecting its leaders, Malaysia has proven that it is democratic to that extent," he said, noting that the country has already held 14 general elections.

Dr Mahathir, 93, who was viewed as governing with an iron fist during his first tenure as PM, conceded that the country had draconian laws like the now-repealed Internal Security Act (ISA), which allowed for detention without trial and could be abused by the government against its dissenters.

"There may be some things that did not conform to the democratic ideals, such as the ISA law," he said, describing it as a statute "inherited... from our colonial masters" that was intended to guard national security.

He also noted that he was called a dictator during his leadership.

"I just would like to point out that in the history of nations, there has not been a single dictator who stepped down while he was in power and allowed others to take over from him," he said. "Dictators don't usually resign or retire."