The two events are afternoon tea party and state dinner, which is expected to be held next week.

Sultan Ibrahim decreed that he made the decision for the rakyat as His Majesty was saddened with their suffering due to the chemical pollution in Pasir Gudang.

"Many are suffering because of the pollution caused by irresponsible quarters where some are still being treated at intensive care unit while schools are still closed.

"I cancelled the two events as I do not want to be in the joyous occasion while my rakyat are suffering," His Majesty said in a decree posted on Sultan Ibrahim's official Facebook page here on Tuesday (March 19).

His Majesty also decreed that cancelling the two events would allow volunteers involving departments and government agencies including security teams to focus on the cleaning works at Sungai Kim Kim.

"As we know, they are many volunteers who are also civilian servants and security teams as well as medical (personnel) involved in the operation and I appreciate their commitment and dedication.

"With that in mind, I feel it is right to cancel the events for the rakyat and volunteer teams that are working round-the-clock," His Majesty added.

Toxic chemicals poured into a stretch of a river in Johor's Pasir Gudang have led to more than 3,000 people being treated for exposure to hazardous fumes, and forced 111 schools to close from last Wednesday (March 18). Nine men have been arrested in connection with the Sungai Kim Kim pollution.

Up north in Selangor, its ruler Sultan Sharafuddin Idris Shah has also voiced his displeasure over river contamination incidents in the state.

He said it had been brought to his attention that four or five rivers in Selangor have been contaminated with solid waste and toxic waste.

He said the state government must initiate more serious enforcement against those responsible for releasing such waste into rivers.

"If there is a need, laws must be formulated to impose heavy punishment on those guilty of polluting rivers in Selangor," Sultan Sharafuddin said on Monday (March 18) in his royal address at the opening of the first meeting of the second term of the 14th state legislative assembly sitting. 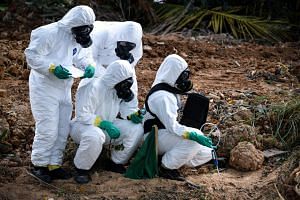 He added the public must also be further educated, through awareness campaigns, on the importance of preserving the cleanliness of rivers which are among Selangor's water sources.

Sultan Sharafuddin's decree comes after last week's incident whereby a section of the Klang River near Taman Eng Ann in Klang was found to be contaminated by a chemical substance.

It is believed the chemical was dumped by irresponsible people into a pond which then flowed into the Klang River.

Meanwhile, Selangor Mentri Besar Amirudin Shari told reporters the situation will be monitored and added that the state authorities required information from the public on such incidents.

"All necessary measures have been put in place and samples have been taken for legal proceedings after which the river stretch was cleaned up,'' he added.

Later on Monday, exco in charge of environment Hee Loy Sian issued a statement that ponds, soil and drainage that had come in contact with the pollutant had all been cleaned up by Sunday (March 17).

"Some 28,000 litres of waste matter has been removed by two suction tank lorries, and is currently being stored pending disposal,'' he said.

Mr Hee added an appropriate disposal method will be used to get rid of the waste once a report is received from the Chemistry Department.

He said so far the waste matter has not been detected in the drainage and water sources in the location and its surrounding areas.