JAKARTA - The number of hot spots picked up across Indonesia by satellites fell slightly to 214 on Monday (July 31), according to latest figures from the National Disaster Management Agency (BNPB).

This after forest fires, most of which were located in the western regions of Aceh and Kalimantan, led to 239 hot spots the day before, said to be the highest so far this year.

While the haze from fires in West Aceh, which had forced some schools in its capital Meulaboh to close, had largely abated, more hot spots were detected in West Kalimantan and Riau - now the two worst-hit provinces.

Dr Sutopo had attributed the rise in the number of hot spots to the seasonal dry spell, which is forecast to last until September.

Forest and peatland fires in Sumatra and Kalimantan that led to the transboundary haze have been kept at bay since 2015. 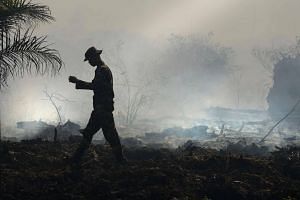 The haze caused record air pollution levels in the region for months that year, pushing Indonesia to the verge of a national emergency.

Since then, the central government has been working with local authorities and plantation companies to ramp up efforts to prevent and fight fires.

But as the dry season kicked in, all eyes were again on Indonesia, following reports that smoke from fires in Meulaboh caused dozens of people, including children to suffer from lung infections from the haze.

Aceh police chief Teguh Priyambodo Nugroho, said 14 people have been called in for questioning in connection to the fires in the regency.

He told Kompas news on Monday that these include both land-owners and workers who were present at the time of the fires, but they remain witnesses until the police has evidence to prove otherwise.

The schools in Meulaboh reopened on Monday morning as conditions improved throughout most of the country, with air pollution at between "good" and "moderate" levels, according to Indonesia's Meteorological, Climatological, and Geophysical Agency (BMKG).

Meanwhile, aerial fire-fighters in Riau have dropped more than 21 billion litres of water over fires raging across the Indonesian province in Sumatra since January, as efforts to prevent a repeat of the haze crisis continues across the country.

The amount, delivered by helicopters over 549ha of land affected by fires in the province thus far, is enough to fill more than 8,800 Olympic-sized swimming pools, or supply Singapore's total water demand for 11 days.

Similar water-bombing missions are also being carried out over West Kalimantan in recent days, where the highest number of hot spots were recorded since Thursday.

Environment and Forestry Minister Siti Nurbaya Bakar said on Monday that these air sorties are focused on fires in areas where there is no road access. "If land access is difficult or shut down for a long time, then we will use water-bombings," she added.

Neighbours Malaysia and Singapore, which were also badly affected by the haze crisis in 2015, have reiterated their offers to assist Indonesia in its fire-fighting efforts.

According to a Bernama report on Monday, Malaysian Natural Resources and Environment Minister Datuk Seri Wan Junaidi Tuanku Jaafar said Putrajaya was concerned about the fires in Indonesia, but is ready to provide help at any time.

"I have discussed it with Datuk Seri Shahidan Kassim, who is in charge of the Fire Department and the Special Malaysia Disaster Assistance and Rescue Team, and he has given an assurance that they are ready," he told reporters at a community event on Sunday.

Senior Minister of State for Defence and Foreign Affairs, Dr Mohamad Maliki Osman, also reaffirmed Singapore's commitment to work together with Indonesia to tackle the haze issue during his visit to Pekanbaru and Jambi last week.