Ms Rossukon Samabutr steps away from her vending cart outside Bangkok's Lumpini Park, trying to blink away the dryness in her eyes.

"I feel really weak," the 38-year-old said. "Even when I smoked, or slept late, I never felt this bad. Where is this smog coming from?"

A noxious haze that has blanketed the Thai capital in recent days is likely to peak this weekend, and may even linger till the end of next month, said the authorities, as unusually still air prevents fine-particle pollutants from dispersing.

Bangkok residents had a brief respite yesterday morning when a breeze brought the level of PM2.5 - pollutants so small they can penetrate deep into the lungs and cause serious health problems - under the safety threshold of 50 micrograms per cubic m.

During the past week, however, landmarks faded from the hazy skyline as the PM2.5 levels climbed to as high as 143 micrograms per cubic m in the worst spots.

Such grey skies are more typical of Thailand's northern regions during the dry season, when forest fires are worsened by blazes that farmers start to clear their land.

Normally relaxed Bangkok residents raided pharmacies and con-venience stores for masks or fished out the ones they had left lying around their homes.

"I don't normally use a mask except when I am riding my motorcycle," said Mr Papon Ueanukorn, a 60-year-old retiree. He used to be constantly exposed to exhaust fumes on the road before, having worked as a driver for many years. "But I started to get scared." 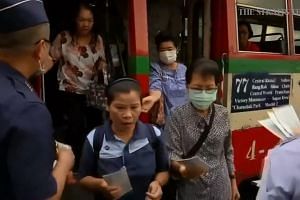 High-pressure water cannon, normally used for firefighting, were directed into the air as the Bangkok authorities sought to ground the dust swirling around.

"We will spray roads every day until the situation gets better," Bangkok Deputy Governor Taweesak Lertprapan told The Straits Times, while acknowledging that the daily drenching would have little effect on the fine pollutants.

For a longer-term solution, the Bangkok Metropolitan Administration has been working with the Department of Land Transport to find a way to reduce the number of pollution-emitting diesel vehicles on the road, he said.

Bangkok's notorious traffic jams, which contribute to the fumes, have been worsened of late by construction work on new electric train lines across the city. As a stop-gap measure, work on the train lines has been halted.

"We have talked to the train contractors to not take up a bigger road space than necessary to minimise traffic jams," said Mr Taweesak.

Traffic police have started clamping down on smoke-belching vehicles.

Meanwhile, Thailand's Department of Royal Rainmaking and Agricultural Aviation, which is normally deployed to help farmers, told The Straits Times that it would continue trying to seed clouds until the smog in Bangkok fades.

The haze has been an important wake-up call, said government spokesman Puttipong Punnakan.

"Before this, the government department tried to persuade people to reduce emissions, to change from diesel to biodiesel, to ask people not to burn their garbage," he told The Straits Times. "Now, people have seen for themselves the smog and are starting to understand. I think they will start working together to avoid this problem."

Meanwhile, Ms Rossukon is taking two paracetamol tablets a day to cope with her haze-related ailments. She has not gone to see the doctor.

"I want to deal with this myself," she said. "I want to somehow develop an immunity to this."