BANGKOK (THE NATION/ASIA NEWS NETWORK) - After spending several days choking on high levels of fine particle dust, many Bangkok residents have opted for masks to protect themselves.

But some were unable to find the N95-grade face masks required and are calling for the authorities to cover the shortage.

Meanwhile, an online poll conducted by The Standard online magazine among 2,200 residents on Monday (Jan 14) and Tuesday revealed that 50.3 per cent wore masks to protect themselves, while the remainder complained they could not find one.

They said they had visited many pharmacies and convenience stores, but were told they would only get one in two weeks if they make a reservation or post order for the product now.

Another poll conducted by the magazine on Twitter found that 53 per cent of the 715 respondents wore a face mask.

Most people responded to the question - "How do you live with PM2.5 (dust particles 2.5 micrometres or smaller in size)?" - by criticising the government for being too slow in dealing with the issue and not having any remedial measures in place.

Many also complained of developing respiratory problems due to the dust. 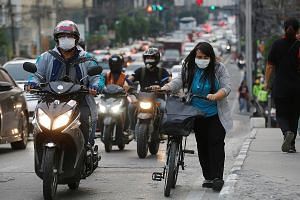 On Tuesday morning, several people in Lat Phrao Road were seen wearing masks to protect themselves from allergies or health problems. They, too, complained of the shortage of N95 masks and called on the government to ease the shortage.

Similarly masked people were spotted in Sathorn and Silom roads, while pharmacies in the Victory Monument area confirmed a severe shortage of N95 masks.

Meanwhile, joggers in Chatuchak's Wachirabenchathat Park were also seen wearing masks, in line with official advice that people should protect themselves while outdoors because PM2.5 levels in many areas were beyond the safe limit of 50 micrograms per cubic m of air.

A man identified only as Krit said he has been wearing an N95 mask during his daily run and is closely following air quality updates and warnings.

Meanwhile, a research report has warned that the severe air pollution problem will take a heavy toll on the country's economy unless the authorities can effectively clear the smog.

A Kasikorn Research Centre analysis on Tuesday said the smog could cost Thailand 6.6 billion baht (S$280 million) in losses for the healthcare and tourism sectors.