YANGON (AFP) - After relentless diplomatic pressure and global outrage, fallen democracy icon Aung San Suu Kyi finally decided that a pardon for two Myanmar journalists jailed for reporting on a Rohingya massacre was the only way to resolve an issue that has dogged her government for nearly 18 months.

Observers say the unexpected release of the two Reuters reporters was a political decision timed to save face for the country's civilian leader, after a vigorous international campaign that saw human rights lawyer Amal Clooney join their legal team, Time magazine put the pair on their cover, and journalism awards and honours pile up - including the prestigious Pulitzer Prize.

A presidential pardon freed Mr Wa Lone, 33, and Mr Kyaw Soe Oo, 29, from prison on Tuesday (May 7) to a media frenzy and messages of congratulations from the White House to United Nations Secretary-General Antonio Guterres.

The pair spent more than 500 days behind bars under colonial-era state secrets convictions after probing the extrajudicial killing of 10 Rohingya Muslims during a military crackdown.

Global attention on the reporters and the damage already done to the country's reputation were "potentially costly" to the government, said independent analyst Richard Horsey.

Nobel laureate Suu Kyi - already seen as a pariah by many for perceived complicity in the Rohingyas' plight - provoked outcry when she refused to intervene, insisting the "rule of law" must be followed.

The abrupt decision to release the pair this week was made because Myanmar's leaders had "taken into consideration the long-term interest of (the) country", said government spokesman Zaw Htay. 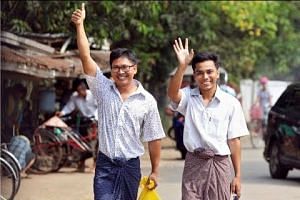 Retired Thai diplomat Kobsak Chutikul, who has worked in an advisory capacity to Ms Suu Kyi's government, told AFP that senior officials had all known a pardon must be granted at some point but "nobody felt they could bring this up with her".

Myanmar is due to go to the polls next year and this was a chance to "get it out of the way" beforehand rather than risk overshadowing the vote, Mr Kobsak said.

'ALBATROSS ROUND THEIR NECKS'

Behind the international condemnation, backroom diplomacy appears to have played a key role in convincing Ms Suu Kyi to pardon the reporters.

One man waiting among the crowds outside the gates of Yangon's notorious Insein Prison was British health expert Lord Ara Darzi, whose name barely came up during regular media coverage of the saga.

A close confidant of Ms Suu Kyi, he has regularly visited the country over the past two years in an advisory role on a Rakhine state commission.

But he has known the leader for years, and hosted her in London after her release from house arrest.

"From what I hear, he finally found the opportunity to convince Suu Kyi this was an albatross hanging round their necks," said Mr Kobsak, who served alongside Lord Darzi on another Myanmar government commission.

The discussion would have taken place "behind the scenes, in quiet conversations in her house", he added.

Lord Darzi later hinted about his role to reporters at a press conference following the journalists' release. 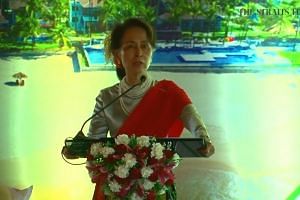 "The lesson is simple: Dialogue works even in the most difficult of circumstances," he said.

Presidential pardons are traditionally granted around the Myanmar new year in April.

Mr Wa Lone and Mr Kyaw Soe Oo were freed in the third amnesty in just over a week that saw a total of 23,000 prisoners released.

Reuters maintained the duo were imprisoned in retaliation for their expose, while legal experts argued the case was riddled with irregularities.

With the judicial process having run its course all the way to Myanmar's top court, Ms Suu Kyi "may have been convinced the twisted passage of justice had been served", Yangon-based analyst David Mathieson said, calling her change of heart a "political calculation".

Despite the release, observers warn against reading too much into prospects for greater press freedom in the beleaguered democracy, which began a troubled transition from military rule in 2010.

"The pardon will not change the conditions that journalists (in Myanmar) are facing," said activist Cheery Zahau.