BANGKOK - Two award-winning Myanmar journalists who were jailed over their coverage of the Rohingya crisis were freed from jail on Tuesday morning (May 7) after a presidential pardon.

Reuters journalists Wa Lone, 33, and Kyaw Soe Oo, 29, were detained in December 2017 and then subsequently sentenced to seven years for breaching the Official Secrets Act.

They were freed on Tuesday as part of an amnesty granted to more than 6,000 prisoners.

In a video released by Reuters shortly after both men walked out of Yangon city’s Insein prison, Mr Wa Lone thanked their supporters.

“I’m really happy and excited to see my family and my colleagues,” he said. “And I can’t wait to go (to) my newsroom.”

At the time of their arrest, the pair had been investigating the killing of 10 Rohingya Muslim men and boys in the village of Inn Din in Rakhine state.

They uncovered evidence that security forces  as well as ethnic Rakhine civilians carried out the murder, which took place amid a brutal military crackdown on ethnic Rohingya insurgents and their supporters.

Around  700,000 Rohingya fled into neighbouring Bangladesh amid the military “clearance” operation and are now sheltering in what has now become the world’s largest refugee settlement.

Reuters has maintained that the two men  are innocent and staged a global campaign for their release.

Its editor-in-chief Stephen J. Adler said: “We are enormously pleased that Myanmar has released our courageous reporters, Wa Lone and Kyaw Soe Oo. Since their arrests 511 days ago, they have become symbols of the importance of press freedom around the world. We welcome their return.” 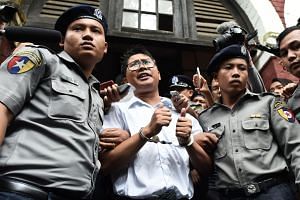 Release of Myanmar journalists a good first step: The Statesman

The United Nations office in Myanmar said it “considers the release of Wa Lone and Kyaw Soe Oo a step toward improving the freedom of the press and a sign of government’s commitment to Myanmar’s transition to democracy”.

“The UN stands ready to continue to support Myanmar in its complex transition process,” it said in a statement.

Myanmar’s military is autonomous by virtue of a Constitution that guarantees the military control over three vital ministries and a quarter of all parliamentary seats.

The civilian government, headed by National League for Democracy party leader Aung San Suu Kyi and formally fronted by President Win Myint, early this year  took the first steps in trying to amend the Charter, but appears unlikely to be able to make ground before next year’s general election.

Over the past few months, an emerging flashpoint in Rakhine state is proving to be another minefield for journalists. Ethnic armed group Arakan Army, which seeks autonomy for Rakhine people in the state, has been locked in fierce battles against the Myanmar military.

The pitched battles,  which have  spread to the archaeological and tourist haven of Mrauk U, have been mirrored by a propaganda war, with both sides accusing each other of harming civilians.

Last month, the military sued local news outlet Irrawaddy over what it calls unfair coverage of the conflict.

More recently, the home affairs ministry has opened a case against the chief editor of Development Media Group (DMG), which covers the Rakhine state conflict closely, for allegedly breaching the Unlawful Association Act that  bans contact with outlawed groups.

According to the Irrawaddy, police questioned two DMG journalists last  Sunday and Monday.

Under this law, managing or assisting an unlawful association can result in up to five years’ jail.