BEIJING • The pageantry permeating Beijing this week showed that China's expansive vision for a new global economic order had another goal: Boosting President Xi Jinping's grip on power at home.

From fawning state media campaigns to the words of the man himself, the so-called Belt and Road Forum repeatedly stressed Mr Xi's centrality to the infrastructure-and-trade initiative that brought about 30 world leaders to Beijing, including Russian President Vladimir Putin.

Since Mr Xi first outlined plans in 2013 to recreate ancient Silk Road trading routes between Asia and Europe, the programme has repeatedly changed names and been elevated to a top national strategy spanning the globe. 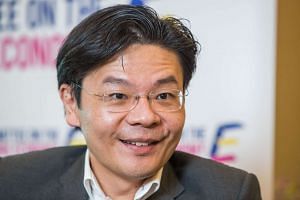 But the pomp left little room for serious talk about overcoming the challenges facing such a sweeping initiative.

One participant in the policy discussion sessions, who asked not to be identified, said the events offered little more than prepared remarks praising Mr Xi, wasting an opportunity for substantial debate on how to collaborate and best spend China's money.

Even before the event got under way, some diplomats in Beijing were complaining that the Chinese had not allowed sufficient time for input while preparing the event's final communique, according to people familiar with the process. The draft combined commitments to open international markets with endorsements of China's diplomatic goals.

The next few years will shape Mr Xi's legacy for decades to come. Greater prestige may help him put supportive officials in place during a twice-a-decade leadership reshuffle that will determine his ability to enact a politically fraught economic overhaul.

Peking University political science associate professor Zhang Jian said: "In a year of power transition, if you can score a domestic policy or diplomatic victory, it is a political bonus."

A version of this article appeared in the print edition of The Straits Times on May 17, 2017, with the headline 'Xi at centre of China's vision for new global order'. Subscribe
Topics:
More
Whatsapp Linkedin FB Messenger Telegram Reddit WeChat Pinterest Print Purchase Article Copy permalink