Singapore can play a role to help finance Belt and Road projects, and provide expertise in infrastructure planning. Singapore companies can also partner Chinese companies to invest in South-east Asia, he said.

"But we should be aware that it can present competition. With the Belt and Road (initiative), new infrastructure will be built all around us... Trade routes will be adjusted as these new roads and ports get built and developed," said Mr Wong, who represented Singapore at the inaugural Belt and Road Forum in Beijing on Sunday and Monday.

The diplomatic event, touted to be the biggest held by China, had 1,500 participants from more than 130 countries.

Mooted by Chinese President Xi Jinping in 2013, the Belt and Road initiative is an ambitious plan to link China to Asia, Africa and Europe, via land and sea.

Mr Wong told reporters that other countries are looking to be the next transshipment port, air hub, sea hub or financial hub as they ride on Mr Xi's mega project, which promises to boost growth by building roads, railways, ports and industrial parks along the trade routes.

"This means that we shouldn't be complacent and should continue to work hard to make Singapore relevant," he said, noting that Singapore is doubling the capacity of its airport and seaport, which will make them more relevant in the future. 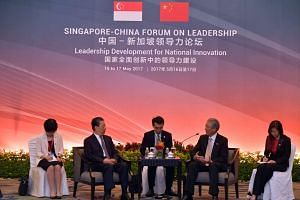 When asked why Singapore Prime Minister Lee Hsien Loong did not attend the Belt and Road Forum, which was attended by 29 heads of state and government, including many from South-east Asia, Mr Wong said the invitation was decided by the Chinese.

The focus of the forum, he noted, was on encouraging Chinese firms to go overseas and the channelling of Chinese investments abroad. Singapore does not have any infrastructure projects linked to the initiative.

"It doesn't mean that we are completely irrelevant," Mr Wong said.

When the Japanese started investing in South-east Asia in the 1980s, they aimed to relocate their factories and outsource manufacturing to cheaper places, he said. As their investment needs matched Singapore's development needs, the Government worked hard to make the country a good regional base for Japanese companies.

"Now, the wave of (Chinese) investments may be more infrastructure related. (The infrastructure projects) may or may not be in Singapore because our infrastructure needs are very different from those of the developing countries around the region," he added.

But as a financial and infrastructure centre, Singapore can help broker Chinese investments to those countries and partner Chinese firms to venture into the region.

Mr Wong was asked about plans by Hong Kong's rail operator to partner state-owned China Railway Corp to bid for the construction of the Singapore-Kuala Lumpur high-speed railway.

If the bid is successful, Singapore will have its first Belt and Road project right on its shores.

Mr Wong said: "We welcome the participation of all companies, including those from Hong Kong and China."