In the last of a three-part series, The Straits Times focuses on the unlikely foot soldiers in Beijing's controversial move to lay claim to the South China Sea.

Chinese fisherman Lin Guanyong knows he has a perilous job working in the South China Sea, and it is not just the weather.

He was detained once by the Vietnamese authorities in 2001, after he and his 20 crewmates were arrested and charged with illegal fishing in Vietnam's waters.

Their boat was towed to a port in Vietnam, where they stayed on board, while another boat was sent back to China to get the US$2,500 (S$3,400) needed to pay their fine. They were released after two weeks.

"We get harassed all the time by the Vietnamese coast guard," Mr Lin, 40, told The Straits Times.

"If they didn't arrest us, they would have boarded our boat, taken all our fish and whatever else they fancied." And in a rare move last week, Vietnam reportedly seized a Chinese ship that its captain said was carrying fuel for fishing boats.

Clashes between coast guards and fishermen from different countries increasingly make the news. While Mr Lin admitted that he had crossed into foreign waters, he said fishermen from other countries often entered Chinese waters as well. Soon after their detention, he and his crew were back fishing in the same areas.

So he is glad that China's coast guard is building up its fleet to better protect its fishermen, who are often caught up in territorial disputes in the South China Sea as they venture further out with the thinning of stocks nearer to shore.

"My heart aches whenever I hear news that a Chinese fisherman has been arrested or hurt," said fishermen Mo Taifu, 60, who, like Mr Lin, is based in the fishing town of Tanmen, on the east coast of Hainan island, China's southernmost province.

While China's fishermen hail from many coastal provinces, including Zhejiang, Guangdong and Guangxi, those from Tanmen are among the most politically important for the country because they have been fishing for generations near the Spratlys.

"Their fishing activities and records are one of the main pieces of evidence for China's historical claims in the South China Sea," noted associate research fellow Zhang Hongzhou from the S. Rajaratnam School of International Studies (RSIS), an expert on China's fishing industry and maritime security.

Some of Tanmen's fishermen are actively involved in territorial tussles. In a stand-off two years ago with Vietnam over China's positioning of an oil rig near the disputed Paracel Islands, both countries encouraged their fishing fleets to enter the area to disrupt each other's plans. Many Chinese boats which did were from Tanmen.

Tanmen's political importance was further underscored by a historic visit in 2013 from President Xi Jinping, who urged fishermen to support the government's island constructions in the South China Sea, adding that the authorities would protect them. 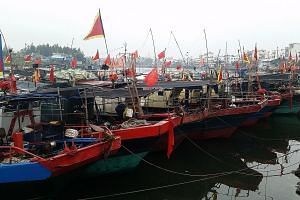 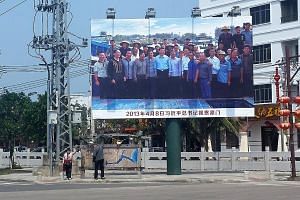 For years, the fishermen have already been helping to deliver supplies and maintain their presence in China's Spratly outposts. Mr Lin joined one such effort in 2012.

But the fishermen say they also need to venture further now because stocks nearer shore are being depleted to satisfy demand from the world's biggest seafood consumer. China's fishery production has risen dramatically - from five million tonnes in 1978 to 64.6 million tonnes in 2014.

Fishermen interviewed by The Straits Times said they head out to the South China Sea for increasingly rare fish like the golden threadfin bream, whose wholesale prices have doubled from 30 to 60 yuan per kg in the past five years.

As such, retired fisherman Li Huabo, 70, feels it is "ridiculous" that other countries want to deny them their fishing rights. He began fishing when he was a teenager, and both his father and grandfather fished in the Spratlys.

"We fished in these seas way before others," he said. "How can they stop us?"

Similarly for Mr Shi Yingbo, 60, fishing runs in the family.

He said his father was once caught by the Malaysian authorities in the 1980s. They wanted him to sign papers admitting that he had trespassed into foreign waters.

"He said even if they beat him to death, he would not sign the papers. I would do the same if I were in his shoes," said Mr Shi, whose father was released after being detained for three months. But while protecting what many Tanmen fishermen call their "ancestral seas" is important, they are ultimately most concerned about their livelihoods, and are not merely passive actors following government orders, noted Mr Zhang from RSIS in Singapore.

"The fisherman don't want war in the South China Sea as they will be prevented from fishing and their lives will be threatened," he said.

In fact, fishing is an increasingly difficult livelihood, said fisherman Wang Jingming, 28, as the development of China's farmed fish sector puts the squeeze on prices of some species. Stricter enforcement of bans on certain seafood items, including the lucrative giant clam, is adding to their woes.

"We had some government officials come to teach us how to improve our fishing technologies to improve our efficiency," said Mr Wang. "But our margins are thinner than before."

He added that this is why Tanmen's fishermen still depend on fuel subsidies from the government.

"I'm uneducated, that's why I'm a fisherman," said Mr Lin, a father of three. "I'll do this for another 10 or 20 years, but I hope my children don't follow in my footsteps."