Chinese fisherman Chen Zebo was 13 when he first went out to sea, 19 when he headed to Scarborough Shoal and 30 when he was first arrested by the Philippine authorities on charges of illegal fishing.

Through his encounters in the South China Sea with the Filipinos, he learnt one English word: China. And though he claimed to have suffered interrogation and beatings by the Philippine authorities, he said he never admitted to any wrongdoing.

"Zhe ge di fang shi China de! Shi China de! (This place belongs to China! This is China's!)," he shouted at the Philippines coast guard during their last clash in 2012 at Huangyan Dao, the Chinese name for Scarborough Shoal, a chain of reefs and rocks with an inner lagoon, claimed by China, Taiwan and the Philippines. 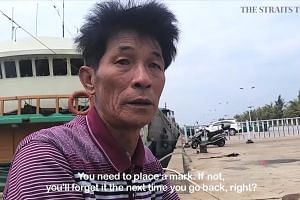 The story of Mr Chen, 48, was one of many fishermen's accounts on display at the cultural centre in Tanmen, a traditional fishing village of 31,000, located on the eastern shores of Hainan island.

"You could call them our local folk heroes," said cultural centre employee Mu Zi, 29, who beamed with pride as I perused the displays during a visit to Hainan last month.

Sentiments like these were common during my interviews with locals. They suggest that China's move to promote civilian participation in its South China Sea territorial claims in the last few years is a shrewd one.

In 2013, President Xi Jinping became the first top Chinese leader to visit Tanmen, whose historical fishing activities form an important part of China's claim to the Spratly Islands, which are also claimed in full or parts by Taiwan, Brunei, the Philippines, Malaysia and Vietnam. He praised the villagers for safeguarding China's sovereignty and promised to take care of them.

That same year, China launched its first passenger cruise to the Paracel Islands, which recently marked its 100th departure.

Almost all the passengers I spoke to who were disembarking from one cruise last month said they joined the trip to see the southernmost point of "our motherland", referring to the archipelago that Vietnam and Taiwan claim as well.

These nationalistic segments of the public form a pool of convenient and ready-made participants that China is artfully tapping in bolstering its sovereignty claims.

The more civilians get involved, the more China gets de facto control and presence in the South China Sea, without having to resort to forceful measures.

This comes as more Chinese move to live on Woody Island in the Paracels, where the authorities are building infrastructure and preparing for civilian commercial flights. There are now about 1,000 residents.

But these initiatives come with risks.

China can push tourism to the Paracels, which it controls. However, this cannot be achieved without significantly increasing infrastructure, travel agents say.

The Chinese cruise ship Star of the Beibu Gulf, for instance, currently tours the Crescent group of islets, which have few facilities and no accommodation. Beyond walking on the beach, snorkelling and a much-hyped flag-raising ceremony, there are few activities for passengers to engage in.

Yet as China's ongoing construction activities in the South China Sea have shown, building new infrastructure immediately sets off alarm bells in the region. They invite unwanted attention and antagonism, while diluting the civilian element in the venture.

Engaging fishermen - seen by many as the vanguard of China's "maritime rights protection" - brings up its own set of problems.

Tanmen's fishermen usually head out to sea after the end of the Spring Festival or Chinese New Year and do not return for a month or two. Yet quite a few vessels were moored at its harbour during my visit, about four weeks after the festive season.

Locals explained that depressed prices of certain seafood and stricter Chinese enforcement against giant clam harvesting - which had been highly profitable for them - were among the reasons some chose temporarily not to head out to sea.

Furthermore, their trade is sustained by the government's fuel subsidies, which are pegged to global oil prices and not to the amount of fuel used. With depressed crude prices, these handouts have plunged.

Indeed, while they are fiercely protective of their historical right to fish in the South China Sea, fishermen are more concerned about their bottom line.

They told me their trade is an increasingly difficult one, and many are not keen on their children following in their footsteps. Perhaps further government incentives can change their minds, but there appears to be no guarantee.

Encouraging them to continue fishing is one issue; monitoring those who continue going out to sea is another.

These actions raise the risk of further clashes with the authorities from other countries, at a time when China's neighbours have developed heightened sensitivities towards its fishing boats.

All these discussions raise the question of why China wants to increase civilian involvement in the first place. If it is meant to soften the more aggressive military or state-led actions in territorial claims, it should not result in tensions worsening.

Yet, pushing tourism and fishing could be more threatening and challenging than it first appears.

Some may argue that China will not care if tensions get ratcheted up another notch or two with its neighbours. But it should spare a thought for those who may be most affected.

For all their talk about asserting historical rights, Tanmen's fishermen were wary about conflict.

"China is strong now and whoever has the strongest fist will win," one fisherman told me. "But war won't benefit us either."