This will enable, rather than stifle, innovation, and can also help level the playing field, allowing start-ups with innovative ideas to compete, he added.

Such a framework was cited by Mr Heng at a forum here on artificial intelligence as one of three "enablers" that will help bring about the adoption of AI across the economy and society.

The other two enablers are investing in research and development, and promoting the acceptance of AI among the public.

Mr Heng also drew attention to "regulatory sandboxes" in Singapore. They allow the Government to have a keen understanding of emerging technologies and new business models while staying alert to potential risks.

In a regulatory sandbox, legal and regulatory requirements are relaxed, so firms can test bed their solutions in real but contained environments.

For instance, the Land Transport Authority does this for autonomous vehicles and the Monetary Authority of Singapore does this for fintech, Mr Heng said, as he invited businesses and entrepreneurs from China to test bed their solutions in Singapore's regulatory sandboxes.

He said there was also potential for Singapore and China companies to form partnerships and test bed AI technologies in Asean cities.

"Good regulatory policies build public trust. For technologies to receive widespread acceptance, the public must be convinced that their safety, privacy and data are safeguarded," he said.

"Some may see this as counter-intuitive, as rules and regulations may be more traditionally known to stifle, rather than enable, innovation," he said. 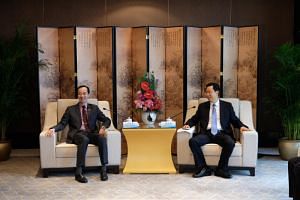 Mr Heng, who is in China on a working visit, delivered the opening address at the inaugural Sino-Singapore Artificial Intelligence Forum held at the Singapore Nanjing Eco Hi-Tech Island, a development zone located on an island in the middle of the Yangtze River.

He noted that in research and development, the National Research Foundation has kept public R&D spending at 1 per cent of gross domestic product each year with good results.

In terms of promoting the acceptance of AI, the young must also have a strong foundation of skills and knowledge so they are ready for the "AI-enabled economy of the future", he said.

In Singapore, secondary schools introduced computer studies as a subject in 2006, while China recently released an AI textbook for high-school students.

In his speech to about 350 AI experts and professionals, Mr Heng also touched on the transformative potential of AI to synthesise large amounts of information, improve lives and raise productivity.

This was especially important for countries such as Singapore and China that have ageing populations and slowing labour force growth, he said.

"The economic potential is significant," said Mr Heng, citing a recent study by consulting firm McKinsey estimating that AI could create US$3.5 trillion (S$4.7 trillion) to US$5.8 trillion in annual value for the global economy.

"The potential is promising, but to realise the potential, governments, businesses, academia and the public have to work together," he said.

The one-day forum, which aims to attract AI companies and experts to move to Nanjing and the island, was organised by the Nanjing government and the Chinese Association for Artificial Intelligence.

Mr Heng arrived in China on Thursday for a nine-day working visit. He is scheduled to also speak to faculty and students in Nanjing University, and is expected to meet Chinese leaders in Shanghai and Beijing.