The stalemate between the Hong Kong government and anti-extradition groups looks set to stay as Chief Executive Carrie Lam's clarification that the highly controversial extradition Bill is "dead" failed to win over her harshest critics and prompted fresh calls for protests.

Opposition groups and student leaders yesterday rebuffed Mrs Lam's public appeal for the chance and time to end the impasse.

Speaking at the Admiralty government headquarters after weeks of protests, Mrs Lam yesterday sought to lay to rest lingering talk that the passing of the Bill could still be restarted in the legislature.

"So, I reiterate here, there is no such thing. The Bill is dead," she said, stopping short of giving in to protesters' demands that the Bill be withdrawn. "I just want to reiterate that this has nothing to do with my own pride or arrogance. This is the government's full deliberations of the various concerns and factors, and (it has) come to the conclusion that the responses are practical measures for us to move ahead."

While pro-establishment lawmakers - including Ms Starry Lee, who chairs the Democratic Alliance for the Betterment and Progress of Hong Kong, and New People's Party chairman Regina Ip - threw their weight behind Mrs Lam, the Civil Human Rights Front's Ms Bonnie Leung said: "We cannot find the word 'dead' in any of the laws in Hong Kong or any legal proceedings in the (Legislative Council), so how can the government tell us that we have to preserve our rule of law when she herself did not use the principle of the rule of law?"

Ms Leung added that if Mrs Lam refuses to respond to the protesters' five demands, the Front, organiser of the massive peaceful rallies in recent weeks, "will continue to hold protests and assemblies".

Protesters want a full retraction of the Bill, an inquiry into allegations of police brutality, the release of all who have been arrested, removal of the labelling of the June 12 protest as a riot, as well as universal suffrage, which replaces a previous demand for Mrs Lam's exit.

To these, Mrs Lam yesterday denied labelling the June 12 protest a riot, reassured them that whatever label there is will not affect prosecutorial decisions, and said it was unacceptable to give amnesty to protesters who broke the law.

Last week, the Independent Police Complaints Council said it would conduct a fact-finding study of the events from June 9 to July 2. 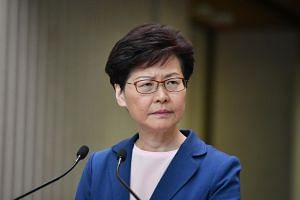 HK protests: No resolution in sight as critics say Carrie Lam's move is 'too little, too late'

Deep anger in Hong Kong behind defacing of city emblem

This would wrap up in six months and the report would be submitted to Mrs Lam, along with recommendations.

But critics pointed out that council members are appointed by the Chief Executive, and the many pro-government figures means it is not as independent as its name suggests. They said the council does not have the power to summon witnesses, unlike an independent inquiry, which is chaired by a judge.

In her 25-minute briefing, Mrs Lam appealed to the wider public to help resolve the deep-seated issues in society that have not been addressed since the 2014 Occupy Central protests, and invited her administration to re-examine controversial policy initiatives. She also welcomed an open dialogue with student leaders of the universities. They had rejected her initial invitation to a closed-door forum.