Future prospects are bleak and Hong Kong may suffer further economic losses if the unrest continues, they said, adding that rational discussions are needed to resolve the controversy.

The assessment followed Monday's (July 1) violent storming of the Legislative Council Complex in Admiralty, which left the building's structure and facilities extensively damaged.

Yiu Si-wing, a lawmaker representing the tourism sector, said the number of tour groups arriving in the city has been falling since mid-June, when the protests first took place. The hotel, catering and exhibition sectors have suffered, he said.

According to Mr Yiu, the number of tour groups from South-east Asian countries slipped 20 to 30 per cent year on year in the past month, while hotels suffered an average 10 per cent decline in revenue, with those in Wan Chai and Admiralty bearing the brunt.

He expected the tourism market's prospects this month to be "relatively gloomy" if protests spread beyond Hong Kong Island.

Demonstrators planned to march on Sunday from Tsim Sha Tsui's Salisbury Garden, which is within walking distance of the popular tourist attraction, Avenue of Stars, to the West Kowloon terminus of the Guangzhou-Shenzhen-Hong Kong Express Rail Link.

Mr Yiu urged protesters to express their views in a peaceful and rational way.

Mr Timothy Chui Ting-pong, executive director of the Hong Kong Tourism Association, is equally pessimistic about the local tourism business in the second half of this year. 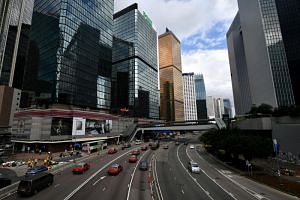 What travellers need to know about the protests in Hong Kong

He reckoned that Hong Kong's economic growth this year may slow down as the tourism industry is a major pillar of the local economy and is closely linked to various businesses.

Mr Chui urged the community to calm down and give the government more room to improve its work.

A manager of a major tourism agency in Hong Kong, who preferred to stay anonymous, told China Daily his company's operations, so far, have not been too badly affected by the protests, most of which had taken place around Admiralty on Hong Kong Island.

But, he warned that the consequences would be more severe if the demonstrations spread to more tourist attractions in the city.

The Federation of Hong Kong Trade Unions in Tourism said on Thursday it's "shocking" to see some people calling for a protest in Tsim Sha Tsui, one of Hong Kong's prime shopping districts with many tourist attractions.

It warned that protests along the area's narrow streets may have a direct impact on residents, tourism and businesses, and paralyse traffic. It said innocent people could be hurt if violence breaks out.

The federation urged protesters to stop harming the tourism business and people's livelihood, and called for rational discussions with the government to resolve the dispute.