TOKYO • One of Japan's top policy-makers had indicated that the government will continue to resist US efforts to create a bilateral free trade agreement (FTA) between the two countries.

"Japan is not going to do anything with any country that harms the national interest," said Chief Cabinet Secretary Yoshihide Suga.

"With FTA negotiations too, we will handle them in that way," he told Bloomberg in an interview last Saturday.

Economy Minister Toshimitsu Motegi and US Trade Representative Robert Lighthizer are expected to sit down for bilateral trade discussions later this month.

Mr Suga said he knows the US side is keenly interested in a bilateral trade deal, but Japan will continue to insist that the US' return to the Trans-Pacific Partnership (TPP) trade agreement is in the best interests of both countries.

Singapore last week ratified the revised TPP free trade deal, now known as the Comprehensive and Progressive Agreement for Trans-Pacific Partnership (CPTPP), or TPP-11, becoming the third nation to do so after Mexico and Japan.

President Donald Trump pulled the US out of the original TPP agreement during his first week in office.

Mr Suga's comments came as officials from the Group of 20 (G-20) countries meeting in Argentina pushed back against the Trump administration, which has shunned multilateral agreements and embraced tariffs.

At the G-20, Finance Minister Taro Aso pressed US Treasury Secretary Steven Mnuchin to alleviate Japan's concerns over trade, discussing US tariffs on steel and aluminium, as well as possible levies on car and auto part imports.

Washington has imposed steep tariffs on steel and aluminium imports from major producers, including the European Union and China, citing concerns that a glut of the metals was hurting US industry and threatening national security. 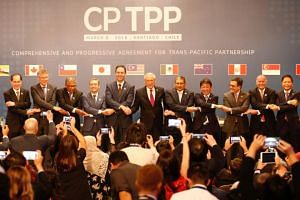 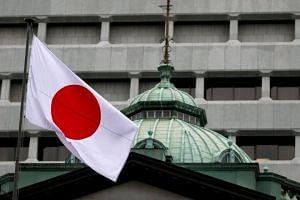 The EU, which has launched retaliatory tariffs against American goods, announced last week that it will launch measures designed to prevent a surge of steel imports from other places into the bloc.The main exporters of steel to the EU are China, India, Russia, South Korea, Turkey and Ukraine.

The European Commission said that the EU steel industry was "in a fragile situation and vulnerable to a further increase in imports", with US tariffs reducing its capacity to sell there making the industry even more vulnerable.

China's Commerce Ministry said yesterday that it has launched an anti-dumping probe into imports of stainless steel billets and hot-rolled stainless steel sheets and plates from the EU, Japan, South Korea and Indonesia. The move follows a complaint by Shanxi Taigang Stainless Steel, with backing from four other mills, including Baosteel's stainless steel division, it said.

China makes and consumes around half of the world's stainless steel, which is used to protect against corrosion in buildings, transportation and packaging.

While the complaint targets eight foreign producers, it also lists a number of Chinese companies, including the Indonesian unit of one of the world's top producers, Tsingshan Stainless Steel, and 19 traders which import the products.

Some private Chinese companies have opened or started building plants in Indonesia in recent years, drawing on its plentiful nickel resources and lower cost of production.

A version of this article appeared in the print edition of The Straits Times on July 24, 2018, with the headline 'Japan to resist bilateral trade deal with US and push for TPP'. Subscribe
Topics:
More
Whatsapp Linkedin FB Messenger Telegram Reddit WeChat Pinterest Print Copy permalink