Despite teething problems including a power failure and confusion over ticketing, most passengers were pleased with the city's fast trains to China, which started running yesterday.

The first high-speed train to roll out of Hong Kong's West Kowloon station yesterday - the 7am G5736 service - proved a smooth ride, reaching Shenzhen North station in about 20 minutes. But a train from Guangzhou South station halted suddenly between Shenzhen and Hong Kong after a power outage and resumed service minutes later.

There were also some gripes about slow ticketing services and immigration checks.

Still, most of the commuters gave the thumbs-up to the high-speed rail's operations yesterday.

Mr Wu Di, 30, who works in the IT industry in Shenzhen, said it used to take him 3-1/2 hours to travel from his home in Shenzhen to Hong Kong's Causeway Bay, but the high-speed rail has cut travel time to at most 30 minutes.

He said the new service has improved connectivity between Hong Kong and the mainland.

"I believe it will ease traffic, and increase the flow of people and usage of the rail," said Mr Wu, who was in Hong Kong for a weekend getaway. Several rail aficionados were up in the wee hours just to catch the bullet trains on the first day.

Among them was 21-year-old student Zhao Cun Xu from Guangdong province, who made his way to Hong Kong a day earlier just so he could take a ride on the very first train on the city's first high-speed rail service.

"Back on the mainland, when they launched the express rail services, I couldn't get a ticket on the first train so I missed out on the experience," he said.

Student Han Pu, 17, said that although he felt the tickets were too costly, he could not bear to miss the debut of the new express rail link as it "brings Hong Kong into China's high-speed rail network and it is a historic day".

The improved connectivity is also a boon for travel agencies.

Mr Ng Hi On, deputy general manager at China Travel Services, said the agency has sold out of eight tours featuring journeys on the new rail service. "There are 300 people in the tours in total. Most of the tours we organise depart from Hong Kong and we have about three to four tours a day where they come from the mainland," he added.

The new rail service has generated not just excitement, but also controversy - over a 105,000 sq m area in the West Kowloon terminus designated as a mainland port zone.

Mainland officers have almost full jurisdiction over the zone.

Some have argued that this contradicts Article 18 of the Basic Law, the city's mini-Constitution, which states that mainland Chinese laws shall not be applied in Hong Kong under the "one country, two systems" policy.

But Mr Kenny Po, president of the Defend Hong Kong Campaign, a pro-establishment group, said: "If you're a law-abiding citizen, you wouldn't be worried at all when you enter the mainland jurisdiction."

As early as May 2013, Apple Daily reported on serious delays in the high-speed rail project but this was dismissed by Hong Kong metro operator MTR Corporation, which oversees the project.

In July 2013, the key management of MTR, including then chief executive Jay Walder, were notified that the project was unlikely to be completed in end 2015 as planned. 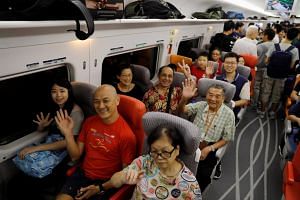 But it was only November that year that Mr Walder told the Secretary for Transport and Housing Anthony Cheung the line would be delayed. The project had further delays, adding to its costs.

In April this year, trial runs for the 26km Hong Kong section of the cross-border rail link were suspended after the derailment of trains at an MTR Corporation depot.

The design consultant miscalculated the forces that the tracks could withstand, MTR said later.

A residential-commercial complex near the West Kowloon terminus was reportedly sinking due to the building of the station. Cracks were found in the concrete walls in Elements shopping mall and its attached residential development.