Project raises hopes of economic boom, but also fears of Beijing tightening its grip on city

The first day of operations for Hong Kong's first express cross-border rail service was largely trouble free. The US$11 billion (S$15 billion) project has raised hopes for increased economic development as well as fears that the link will allow Beijing to tighten its grip on the territory.

Yesterday, ticket-waving rail enthusiasts waited outside the HSR station from 4am, about an hour before the station opened. The day went well overall, despite issues such as slight arrival delays.

The HSR service is one of a few connectivity projects that the Hong Kong government has aggressively promoted as a means of speeding up the flow of people and goods, as well as economic development in the Pearl River Delta's Greater Bay Area.

The area, made up of nine cities in Guangdong province as well as Hong Kong and Macau, is home to 68 million people with a total gross domestic product of US$1.5 trillion.

The 26km-long Hong Kong section of the HSR connects the territory to 44 stations on the mainland and joins the mainland's 25,000km national HSR network, the biggest in the world.

At the opening ceremony of the HSR service on Saturday, Hong Kong leader Carrie Lam said the new rail link will not only promote more exchanges in the Greater Bay Area, but also connect Hong Kong with the Capital Economic Circle and Yangtze River Delta region. 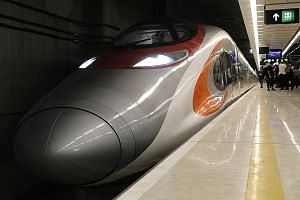 Hong Kong high-speed rail off to good start despite glitches

This, she said, would strengthen "the synergy effect" among the regions and create more development opportunities.

Despite the fanfare, the HSR project, which has taken eight years to be completed, has drawn criticism for delays and a budget overrun.

Controversy also arose over Hong Kong ceding part of the West Kowloon HSR station to mainland Chinese control in order to streamline customs and immigration clearance. Some decried it as Beijing encroaching on the city's autonomy.

But Hong Konger Peter Xu, 64, a retiree who tried out the service yesterday, said such criticism is not objective. "In the first instance, we are part of China so there's nothing wrong with the arrangement."

Most of the 10 passengers interviewed by The Straits Times yesterday said they appreciated the shorter travel time. Retiree Johnny Leong, 71, said he used to take at least 90 minutes to get to Shenzhen from Hong Kong, but the HSR takes just 20 minutes.