BEIJING - The temples of Cambodia's Angkor Wat, rice paddies in the Philippines and Singapore's bustling Clarke Quay will all be playing a role in a documentary showcasing the diversity of Asean that will be broadcast in China in a few months.

The documentary, which was launched on Friday (April 20) by the Beijing Television Station (BTV) and Asean-China Centre (ACC), aims to sell the region as a tourist destination for the Chinese.

The initiative comes as both China and Asean seek to boost ties this year, their 15th year of strategic partnership. People-to-people exchanges like tourism have been identified as a key area of cooperation.

China is the largest source of tourists to Asean, with two-way tourism figures reaching 49 million last year, according to Beijing-based ACC.

It is hoped that these numbers will increase after the six-part documentary, titled "Hi! Asean" airs. BTV said the series is expected to be watched by 100 million viewers.

Ms Kong Roatlomang, director of the ACC's education, culture and tourism division, told the launch ceremony that Asean and China had previously marked out 2017 as a year of "tourism cooperation", where both sides had agreed to encourage greater two-way flows of tourists. 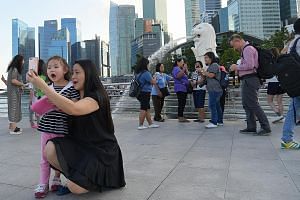 The documentary's chief director, Ms Qin Lei, said her crew filmed at over 150 locations in all 10 Asean countries over 10 months last year.

The team amassed more than 36,000 minutes of footage, ranging from panoramas of iconic sites like Myanmar's Bagan temple complex and Singapore's Gardens by the Bay, to snippets of the lives of everyday people.

"This is not a traditional travel documentary; we hope to bring to people the different cultures, values, thinking and ways of life of the people of Asean," said Ms Qin.

The launch on Friday, at which guests were shown snippets of the upcoming programme, was attended by BTV executives and officials and diplomats from Asean countries.

Philippine ambassador Jose Santiago Santa Romana told the media at the event: "What I'd like the Chinese people to understand is that among these 10 countries, there is a diversity of culture... there is variety here and you can experience a whole range of culture, history, cuisine as you travel around South-east Asia, so it's going to be a treat for Chinese tourists."