Japanese voters could go to the polls as early as Oct 22 in a political gambit by Prime Minister Shinzo Abe to capitalise on improved approval ratings after a bruising year.

Mr Abe said yesterday that he would dissolve Parliament on Thursday to pave the way for an election more than a year before it is due.

The move comes amid heightened tensions over North Korea's missile and nuclear tests, and just weeks ahead of a crucial leadership transition in China.

The snap election, which the opposition slammed as "opportunistic", has been couched by Mr Abe and his ruling Liberal Democratic Party (LDP) as necessary to preempt a "national crisis", and as a mandate for his strategy to raise pressure on the belligerent North.

"The threat of North Korea cannot deter our democracy," Mr Abe said. Though he did not indicate a date, the vote is widely expected to be held on Oct 22.

Mr Abe also said the vote was effectively a referendum on how additional revenue from a scheduled tax hike - from 8 per cent to 10 per cent-in October 2019 will be used.

He vows to spend more on social security, including free pre-school education, and less to pay off government debt. This will delay Tokyo's goal of reaching a primary balance surplus by 2020. 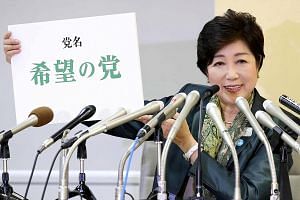 Media surveys at the weekend showed that the LDP was expected to win convincingly, although two-thirds disapprove of a snap poll.

As Mr Abe addressed reporters, more than 100 protesters gathered outside the Prime Minister's Office to demand his resignation.

"It is going to be a very, very difficult election for us. I am ready for that," said Mr Abe, 63, who took office in December 2012 and is two years from becoming Japan's longest-serving prime minister.

His ratings fell at one point this year to below 30 per cent as he became embroiled in two cronyism scandals, and as his defence chief resigned over a major cover-up.

With the main opposition Democratic Party in disarray after an exodus of members, Mr Abe's toughest challenger might be Tokyo Governor Yuriko Koike, 65, who has expressed prime ministerial ambitions.

Ms Koike yesterday announced that she will lead the new national Party of Hope (Kibo No To), two months after the local Tomin First no Kai (Tokyoites First) had, under her charge, trounced the LDP in Tokyo assembly elections.

The rebound in Mr Abe's ratings has been attributed to the North Korean threat, which Dr Jeffrey Kingston of Temple University Japan describes as a "rally-around-the-flag tendency". What remains fresh in voters' minds was the revolving door of six prime ministers between 2006 and 2012 until Mr Abe took power.

Analysts believe that given the lacklustre opposition, voter backlash would not hurt him to the extent that it did British Prime Minister Theresa May, whose gamble in June cost her party its majority.

Dr Sota Kato, executive director of the Tokyo Foundation think-tank, expects Mr Abe to retain his majority, though he said: "Most voters can see through his motives, no matter what Mr Abe says to try to legitimise the reasons for calling an election now.

"In that sense, support for the Abe administration is rather lukewarm, and more voters may stay away from the polls this time."

The LDP and its junior coalition partner Komeito control 323 seats, or more than two-thirds, in the Lower House. It has set a comparatively low bar of securing a simple majority of at least 233 of the 465 seats at stake. Mr Abe vowed to quit if the coalition fails to hit the target.