Tokyo Governor Yuriko Koike, who is touted as a potential future prime minister, yesterday said she will lead the new national Party Of Hope (Kibo No To) into snap polls expected next month.

This is her latest challenge to the ruling Liberal Democratic Party (LDP), of which she was once a member, and to Prime Minister Shinzo Abe, who had handpicked her to be his defence minister 10 years ago.

"Can we continue letting the LDP handle politics?" asked Ms Koike, who has previously criticised Mr Abe's trademark economic policies, dubbed Abenomics, as having "failed to produce a sense of hope".

"I'm launching a new party and I want to be directly involved in it," the 65-year-old said, as she stressed the reform-minded direction that Kibo No To will be taking.

The Tokyo Governor, who intends to stay in her post as chief of Japan's sprawling capital, called a news conference yesterday afternoon, hours before Mr Abe, 63, was to address reporters on his plans to hold a snap election.

"Look around the world. Bold reforms are taking place everywhere, but Japan is lagging behind. Japan needs a real reform-minded force," Ms Koike said. She added that Japan has fallen behind the international push for bold reforms, and that if nothing drastic is done, it will continue to suffer from a declining global presence as a consequence of decades of economic malaise. 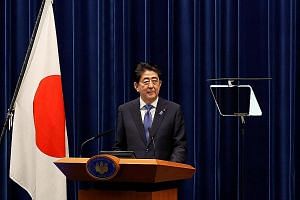 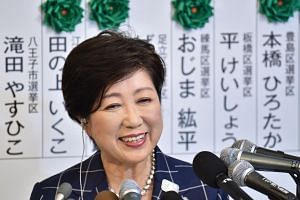 The new party has won over defectors both from the LDP - a senior vice-minister of the Cabinet Office, Mr Mineyuki Fukuda, yesterday jumped ship - and from other opposition parties.

The main national opposition Democratic Party is haemorrhaging lawmakers despite an internal party vote for a new leader earlier this month in a bid to steady the ship. Former foreign minister Seiji Maehara is now its party chief.

Ms Koike's foray back into national politics, she said, was necessary for her to fully implement reforms in the capital. Tokyo has been trying to push through policies that have effectively stalled at the national level, including a law to clamp down on indoor smoking.

She also will campaign on issues including women's rights in the workplace and diversity in politics - only 43 of the current 472 Lower House lawmakers are female.

She also took aim at what she regularly calls the "black box" of LDP politics, promising to champion "politics clean of special interests" in a veiled reference to Mr Abe, who was implicated in two cronyism scandals this year.

Her direct involvement in the new party came as a surprise, as she was previously said to be playing a supporting role to her close aide, Lower House lawmaker Masaru Wakasa.

Later yesterday, Mr Abe sought to highlight the similarities between himself and Ms Koike on issues of national security. "Our concepts are the same. Maybe she has a different direction in terms of other policies, but our basic idea is the same in terms of defence."

This, analysts said, could eventually prove to be a stumbling block for Ms Koike. Dr Jeffrey Kingston of Temple University Japan told The Straits Times: "Her party and the LDP occupy the same ideological bandwidth, so how she convinces voters that there are real differences or that her party offers a better option will be an enormous challenge."

"There might be criticism against her as only two months ago, she headed Tomin First into the election, only to resign as leader after the poll, saying that she wanted to focus on her governor role. So what is she doing now?"