SYDNEY (AFP) - Australia's pins-in-punnets strawberry crisis prompted a spate of social-media driven hoaxes, but sites like Facebook and Twitter are also helping to stir a revival in sales that has left some farmers struggling to meet resurgent demand.

For almost two weeks, reports of pins and needles being found in fruit across Australia have delivered a gut punch to industry, set grocery-shoppers on edge and left police struggling to find needles in a haystack of copycat pranks.

But now Australians - adopting a shrug-and-get-on-with-it attitude - have had enough. They are getting back on their berries.

Wholesalers are reporting an uptick in sales, thanks in part to social media campaigns that encouraged Australians to bake a strawberry pavlova or just "#Smashastrawb" and eat it.

"Things are on the up," said Mr Jim Ripepi of Australian Strawberry Distributors, a family-owned company that grows and sells strawberries wholesale.

"The public support has been really overwhelming. Sales are picking up," he told AFP. "I was selling out every day this week."

Supermarkets are starting to report a similar trend and are even struggling to meet demand after many of their usual suppliers packed up tools fearing the worst.

For some farmers it may be too little too late, but for the industry at large, it's a godsend.

The crisis began almost two weeks ago with needles being found in two brands of strawberries in the northeast state of Queensland.

The cause of the initial scare and the scale of the problem remain a mystery.

Police in Queensland say only that the initial investigation is ongoing, leaving the public to speculate about the motives - could it be a disgruntled employee or competitor? - or how close they are to solving the crime. 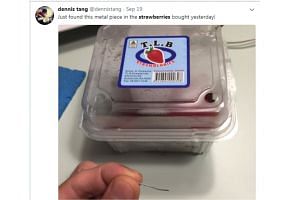 The Australian government has instructed police and other agencies to avoid giving specific numbers about how many pins or needles have actually been found in fruit - including bananas, apples and a mango.

Indications are that of the 100 or so instances looked at by police, the vast majority were hoaxes or pranks.

Two kids are believed to have been cautioned for such copycat stunts and in Adelaide in southern Australia, a father has reportedly been charged with making a false claim to police about his daughter eating tainted fruit.

Australian state governments have offered cash rewards and indemnity from prosecution for anyone providing information about the culprit.

Throughout the crisis, the government of new Prime Minister Scott Morrison has strained to appear in control, using its parliamentary majority to introduce longer potential jail sentences for deliberate contamination.

"We had mums and dads worried about what they were putting in the school kids' lunches. We were able to act swiftly and get that through the Parliament in about 36 hours."

In the latest twist, needles have turned up in a punnet of Australian strawberries in New Zealand, prompting the authorities there to say each punnet would be screened.

Strawberry Growers NZ said there had been no reports of problems with locally-grown fruit.

"While this is naturally of concern to our industry, this is an Australian strawberry issue and there is no evidence to suggest any connection to New Zealand-grown strawberries," executive manager Michael Ahern said.

New Zealand Agriculture Minister Damien O'Connor said it was unclear whether the strawberries had been tampered with before or after they entered New Zealand.

But he did not rule out the prospect of copycat sabotage.

"It's the kind of sordid and sick proposition that does arise when these situations are publicised," he told Radio New Zealand.