SINGAPORE - A local market has removed all strawberries from its shelves as a precaution after a tweet that a metal piece was allegedly found inside a pack of strawberries.

The Agri-Food and Veterinary Authority of Singapore (AVA) is also looking into the case and has urged the public to remain calm.

This comes after recent reports on sabotaged strawberries in Australia, with consumers finding needles in the fruits.

But AVA said that the brand of strawberries mentioned in the tweet was not from the six implicated brands in Australia.

Twitter user Dennis Tang posted a photo on Wednesday (Sept 19) showing a thin piece of metal which he said he found inside a pack of strawberries. He said that the strawberries were bought a day earlier.

Mahota told The Straits Times on Friday that it was informed of the isolated case and has since removed all strawberries from its shelves. 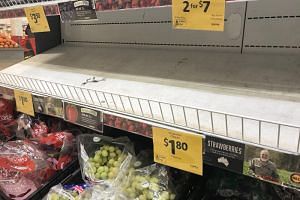 Australians warned to cut strawberries after needles found in fruit

A batch of the strawberries Mahota removed were imported from Perth, Australia.

But the original tweet with the photo of the metal piece has since been deleted. Twitter user Dennis Tang later said that he only posted the picture to warn his friends and "get the relevant authorities to do the necessary investigations and checks". He added that he did not want to cause "unnecessary fear".

Regarding the tweet, AVA said it is "contacting the feedback provider to establish the facts of the case".

"We urge the public to refrain from speculation and not to panic. As a precautionary measure, consumers who have purchased strawberries from Australia can cut the fruits into small pieces before consumption," the authority said.

According to Mahota, the Australian producer of the strawberries has also "provided an official undertaking and video showing that their strawberries undergo strict checks including metal detector checks before sale".

The Singapore supplier of the strawberries, Total Fresh, told ST that it was contacted by both AVA and Mahota on the matter.

Australian authorities have tightened export rules in recent days and have asked exporters to screen their strawberries through metal detectors or X-ray machines.

No other complaints have been received about Total Fresh's strawberries, which were distributed to Mahota on Sept 12, about a week before the Twitter user said he made the purchase, noted Mr Seet.

He was surprised by the incident as strawberries have a short shelf life and are usually not kept for sale after three or four days.

He said: "I'm really not sure how this could have happened."

Supermarket NTUC FairPrice said that it has not received similar reports but has seen sales of strawberries dip about 10 per cent since news of the strawberry sabotage in Australia broke.