Asked about the report on Sunday (June 2) before a visit to Britain, Mr Trump said the US had very strong ties with Australia, without directly mentioning tariffs.

"The Australian situation is interesting but the relationship is very strong," he told reporters at the White House. "No, we're doing a very special relationship with Australia."

Australia’s Prime Minister Scott Morrison also played down suggestions of a trade spat with the US.

"We have an arrangement with the United States, and we are working within that arrangement," Mr Morrison said on Monday.

The New York Times reported that some of Mr Trump's top trade advisers had urged the tariffs as a response to a surge of Australian aluminium flowing onto the US market during the past year.

But officials at the Defence and State departments told Mr Trump the move would alienate a top ally and could come at significant cost to the US.

The administration ultimately agreed not to take any action, at least temporarily.

The measure would open yet another front in a global trade war that has pitted the US against allies like Canada, Mexico, Europe and Japan, and deepened divisions with countries like China. 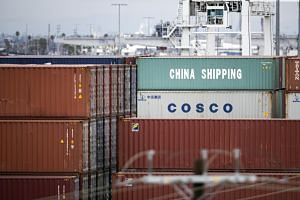 Australia's telling silence on US role in Asia

It would also be the end of a reprieve for the only country to be fully exempted from the start from steel and aluminium tariffs that Mr Trump imposed in 2018.

The Trump administration has fiercely criticised past administrations for making concessions on trade policy to accomplish foreign policy goals.

Mr Trump has said the approach has left the US in the position of subsidising the world, weakening US industry and pushing factories and jobs overseas, and has pledged to rework US trading relationships.

But his decision to hit close allies with tariffs has also prompted an uproar.

The Trump administration said it was imposing tariffs on steel and aluminium to strengthen US national security, but critics argue that the approach strains relationships with allies that are far more important to US defence.

The latest example came last Thursday, when Mr Trump abruptly announced he would also levy tariffs on Mexico to try to pressure that country to stem the flow of migrants across the US' southern border.

The move has sent foreign officials and lawmakers on Capitol Hill scrambling to head off tariffs that could damage Mexican and US businesses and threaten to derail a newly negotiated North American trade deal.

The tariffs on Australia would have hit imports of aluminium, although measures that would have applied to other products had been discussed as well.

Shipments of Australian aluminium to the US have surged since 2018, when Australia became one of the few countries not to face metal tariffs.

The move was an effort to shield US producers from low-priced imports, which the administration said were a threat to the domestic industrial base and therefore national security. Some countries, like Brazil, Argentina and South Korea, won temporary exemptions on some of their imports, but ultimately agreed to limits on how much metal they could ship to the US.

But Australia's full exemption appears to have been the work of former prime minister Malcolm Turnbull, who reached a handshake deal with Mr Trump in 2017 to avoid the tariffs. In August 2018, Mr Turnbull lost the confidence of his party and was ousted from office.

Exempting Australia from tariffs effectively allowed Australian producers to sell cheaper metals to the US than their competitors from Europe, North America and Asia.

Aluminium imports from Australia rose by 45 per cent from 2017 to 2018. They are up even more, by 350 per cent, for the first three months of 2019, compared with the same period in 2018. But Australia remains a relatively small supplier of aluminium to the US, accounting for about 6 per cent of total imports so far this year, according to the US Geological Survey.

Mr Robert Lighthizer, US trade representative, and Mr Peter Navarro, director of the White House Office of Trade and Manufacturing Policy, were among the backers of tariffs on Australia.

But other senior administration officials, who have cultivated ties to Australia, favour prioritising other elements of the relationship.

For one thing, Australia has emerged as an important ally - perhaps the most critical one - in helping Washington constrain China's influence in the Asia-Pacific region. Australian officials have banned the Chinese company Huawei from the country's online networks, and have investigated the Chinese Communist Party's influence and interference in Australia.

Washington is also relying on Canberra to compete with the Chinese for political clout in the Pacific islands. Furthermore, a right-wing party won a general election in May in an upset, and Prime Minister Scott Morrison intends to enact conservative policies.

That means Washington and Canberra are growing even closer, as some US officials find more affinity with their Australian counterparts.