WASHINGTON (REUTERS) - A United States federal judge has extended a ban on the online distribution of 3-D printed gun blueprints, a win for a group of mainly Democratic-led states that said such a publication would violate their right to regulate firearms as well as endanger their residents.

US District Judge Robert Lasnik in Seattle issued the extension of a nationwide injunction on Monday (Aug 27), blocking a Texas-based group from disseminating files for printing plastic weapons on the Internet.

Judge Lasnik's prior order, issued on July 31, blocked the release of the blueprints hours before they were set to hit the Internet. That ban was due to expire on Tuesday and the new one will remain in place until the case is resolved.

Monday's decision blocks a settlement between the Trump administration and Defence Distributed, a group that argues access to the online blueprints is guaranteed under the US Constitution's First and Second Amendments, which protect free speech and the right to bear arms, respectively.

A group of 19 US states and the District of Columbia sued the US government in July, arguing that publishing the blueprints would allow criminals easy access to weapons. They also said that the Trump administration had failed to explain why it settled the case.

Judge Lasnik said the states have submitted sufficient evidence that they are likely to suffer "irreparable harm" if the blueprints are published. The judge also said that Defence Distributed's First Amendment concerns were dwarfed by the states' safety considerations.

Gun control proponents are concerned that the weapons made from 3-D printers will be untraceable, undetectable "ghost" firearms that pose a threat to global security. 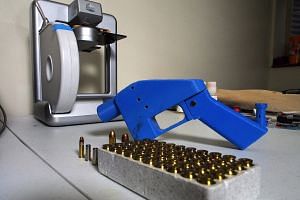 Some gun rights groups say the technology is expensive, the guns are unreliable and the threat is overblown. They also say undetectable guns wholly made of plastic are illegal in the United States.

Although Defence Distributed originally had said it would put the files on the Internet on Aug 1, it did so a few days before Judge Lasnik issued the initial temporary ban. The blueprints continue to be available on several other websites.

The files include 3-D printable blueprints for components that would go into the making of a version of the AR-15 semi-automatic assault rifle, a weapon that has been used in US mass shootings.

"The order is a manifest injustice and literally admits to being an abridgement of the freedom of speech," Mr Wilson said in a statement.

A lawyer for the group said it is currently reviewing the judge's decision and considering all options.

Washington State Attorney-General Bob Ferguson, who led the states' lawsuit, said in a statement that he was glad about the decision, but criticised the federal government.

"Why is the Trump Administration working so hard to allow these untraceable, undetectable 3D-printed guns to be available to domestic abusers, felons and terrorists?" Mr Ferguson said.

The US State Department, which had previously banned the blueprints as a national security risk and a violation of arms trafficking regulations, also did not immediately respond to a request for comment.

As recently as April, the government in court filings argued that downloadable guns would allow extremist groups and criminals abroad unfettered access to arms.

But a lawyer for the State Department said in a court hearing last month that the government had determined in May that the types of guns featured in Defence Distributed's blueprints did not pose a national security risk as they can be bought in any store.

Judge Lasnik on Monday said the government had failed to comply with procedural rules that mandate a 30-day notice period to the US Congress before allowing the files' dissemination.

"Forcing the federal defendants to evaluate the effect of the proposed delisting on world peace, national security, and the foreign policy of the United States... may also prompt a reconsideration of the decision," Judge Lasnik said.