SEOUL (AFP) - North Korea on Thursday (Aug 9) accused the United States of acting in bad faith, saying Washington's push for full sanctions pressure against Pyongyang would stall progress on the denuclearisation of the Korean Peninsula.

During landmark talks with US President Donald Trump in June, the North's leader Kim Jong Un signed up to a vague commitment to denuclearisation, far from the longstanding American demand for the complete, verifiable and irreversible dismantling of Pyongyang's atomic arsenal.

Trump has touted the summit with Kim in Singapore as a historic breakthrough, but both sides have since complained of stalling progress.

In a statement, the North Korean foreign ministry accused the US of "insulting the dialogue partner and throwing cold water over our sincere efforts for building confidence which can be seen as a precondition for implementing" the agreement between Trump and Kim.

The ministry added that expecting "any result" to negotiations in this context was "indeed a foolish act that amounts to waiting to see a boiled egg hatch out".

The statement comes days after the US stressed the need to keep up pressure on Pyongyang through tough sanctions imposed over its nuclear weapons programme.

The foreign ministry, which had earlier slammed Washington's "alarming" impatience for denuclearisation, accused the US of clinging to an "outdated acting script". 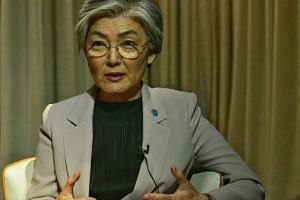 'We need to go in with a deep breath and for the long haul': South Korea's Kang Kyung-wha on denuclearisation process

North Korea denuclearisation in a year not likely: US intelligence chief Dan Coats

"As long as the US denies even the basic decorum for its dialogue partner... one cannot expect any progress in the implementation of the DPRK-US joint statement including the denuclearization," said Pyongyang's foreign ministry, using the initials of the country's official name, warning regional security could suffer.

Since the June meeting, Pyongyang has announced measures including halting missile and nuclear tests.

But a recent UN report showed Pyongyang was continuing with its nuclear and missile programmes and evading sanctions through ship-to-ship oil transfers.

US National Security Advisor John Bolton has also weighed in on the issue, saying Sunday that nobody in Trump's administration is "starry-eyed" about the prospect "of North Korea actually denuclearising".