NEW YORK (NYTIMES) - The spokesman for the Islamic State in Iraq and Syria (ISIS) group emerged from nearly six months of silence Monday (March 18) to mock America's assertion of having defeated the group and to call for retaliation over last week's mosque attacks in New Zealand.

"The scenes of the massacres in the two mosques should wake up those who were fooled, and should incite the supporters of the caliphate to avenge their religion," the spokesman, Abu Hassan al-Muhajir, said in a 44-minute audio recording.

Al-Muhajir portrayed the shootings by a white extremist, which killed 50 Muslims as they prayed in the city of Christchurch, as an extension of the campaign against ISIS. He likened the mosque attacks to the weeks long battle raging in the last village under ISIS control in Syria.

"Here is Baghuz in Syria, where Muslims are burned to death and are bombed by all known and unknown weapons of mass destruction," he said, painting the people in the town as regular Muslims when in fact coalition officials believe that the majority of them are either ISIS fighters or their wives and children.

Throughout his speech, al-Muhajir belittled the White House's claim of victory over the terrorist organisation, calling it a "state of confusion and contradiction that make it impossible for any observer to know what is meant by the word 'victory.'"

While ISIS has lost all but a sliver of the vast territory it once controlled in Iraq and Syria, military officials say the group remains a potent threat.

Al-Muhajir - the name is an invention, and his true identity is unknown - is a faceless but important figure inside the terrorist group. He is not known to have ever appeared in photographs or in the group's numerous videos, and almost nothing is known about his personal biography.

In a testament to the security precautions he takes, he released just two audio statements in 2018, with the last one, appearing in September, less than four minutes long. The spokesman's extended absences - much like those of the group's leader, Abu Bakr al-Baghdadi - have fueled rumours of his death.

Beyond its references to recent events, what is notable about the recording - which was released by the group on the Telegram mobile messaging app - are its numerous mentions of in-the-weeds details regarding ISIS-related current events.

Al-Muhajir refers to President Donald Trump's claim not to know Brett McGurk, the US special envoy in the fight against the ISIS group, who resigned in protest over Mr Trump's decision to pull US troops from Syria. 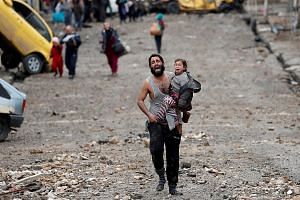 World focus: ISIS is down but it is not out yet

As anti-ISIS forces pursue al-Muhajir and other senior members of the militant group, it is assumed that they avoid detection by shunning electronics, especially cellphones, and limiting contact with couriers, whose movements can be tracked.

That raises a number of questions: How did he know about the slaughter of Muslims in New Zealand? Is he hunkered down in a house in Iraq or Syria and relying on local TV coverage? Did one of his aides bring him the news?

His detailed knowledge of current events is clear as he makes a jab at Mr Trump's hasty visit to Iraq in December, his first to see troops stationed in a combat zone. At the time, the president called it "sad" that he had to take such extensive security measures to make the trip even after the US had spent US$7 trillion (S$9.46 trillion) trying to stabilise the Middle East.

Al-Muhajir refers to the US$7 trillion, adding: "How strange for a victor who can't even announce publicly an official visit to a country he claims to be bringing peace and stability to. He could only come like a frightened and cowardly thief."

Among the revelations in the recording is that al-Baghdadi, the group's leader, is still alive, at least according to the spokesman. Although al-Baghdadi has been declared dead several times, most recently by Russia after an airstrike in Syria, US officials have long maintained that he is most likely still living.

Al-Muhajir closes the recording by referring to al-Baghdadi using an honorific, "May God preserve him," that is employed when a person is still alive.

In the final passage of his speech, the spokesman offers a tip from al-Baghdadi, suggesting he has spoken to him: "A message of advice from the caliph of the believers regarding communication devices: Be careful, careful of communication devices - even if it slows down work from two days to seven days."