FORT LAUDERDALE, Florida (NYTIMES) - Federal law enforcement officials said they were investigating whether the gunman who opened fire at the airport in Fort Lauderdale on Friday (Jan 6), killing five people and wounding eight, was mentally disturbed and heard voices in his head telling him to commit acts of violence.

According to one of the officials, the gunman, identified as Esteban Santiago, 26, had visited the FBI office in Anchorage, Alaska, recently and made disturbing remarks that prompted officials to urge him to seek mental health care.

Officials said it was too early to tell whether Santiago, who was captured in the airport, had been inspired by terrorist groups, including the Islamic State in Iraq and Syria (ISIS). The officials said he had viewed extremist materials on the Internet.

Shortly after 1pm on Friday, the gunman, who had been an airline passenger, pulled a weapon out of his bag and opened fire in a crowded baggage claim area in Terminal 2, officials said.

The shooting spurred a scene of panic and confusion that played out on live television as scores of travellers burst out of the terminal and onto the tarmac, running and seeking cover, at times in response to erroneous rumours of follow-up attacks. 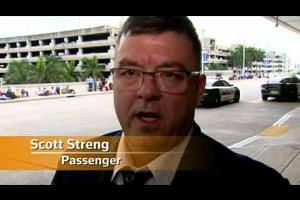 Mr David Fogarty, a carpenter from Key West, was heading to Cancun, Mexico, on vacation when the people around him suddenly began running toward the gates.

"Everybody was dropping gear, panicking, jumping over tables," Mr Fogarty said in a phone interview. "We were saying: What is going on? Are there people shooting? I am not hearing any gunshots, and the whole place is panicking."

Officers took the suspect into custody without firing a shot, and on Friday evening, he was being interviewed by FBI agents and county investigators, as the injured were being treated at hospitals.

On Twitter, President-elect Donald Trump said that he was "monitoring the terrible situation in Florida" and that he had spoken to Governor Rick Scott.

Hours after the attack, a picture began to emerge of Santiago as a man who had served his country, but who had experienced trouble and failure. Santiago was discharged from the Alaska Army National Guard for "unsatisfactory performance" in August, according to Lieutenant Colonel Candis A. Olmstead, the spokesman for the Alaska Guard.

In an e-mail, Lt Col Olmstead said that Santiago joined the Puerto Rico National Guard in December 2007. In 2010, he deployed to Balad, Iraq, with the 130th Engineer Battalion, which spent a year clearing roads of improvised explosives and maintaining bridges; he was awarded a Meritorious Unit Commendation.

At least two soldiers from his company were killed in insurgent attacks during the tour, but there is nothing in the record that indicates Santiago had been in combat.

Lt Col Olmstead said he served in the Army Reserves before joining the Alaska Army National Guard in November 2014. Before his discharge last year, he had worked as a combat engineer as a private first class.

An official service record released by the Army on Friday showed that Santiago had received a number of commendations, including the Army Good Conduct Medal.

In a news conference on Friday, Broward County Sheriff Scott Israel did not say what the suspect's possible motive might have been.

But the shooting comes at a tense time for a nation that has been watching nervously as terror attacks have occurred elsewhere in the world, and as Mr Trump, who has promised to bar Muslims from entering the country, prepares to ascend to the presidency.

Sheriff Israel declined to say whether the suspect had flown into Fort Lauderdale-Hollywood International Airport. But some news reports on Friday indicated that his flight itinerary had begun in Alaska.

In a Facebook post, a Broward County commissioner, Mr Chip LaMarca, said the assailant had been a passenger on a Canadian flight who had checked his weapon in his luggage and then, upon disembarking, went to the airport bathroom to load it.

Mr John Schlicher, a witness who described the scene to MSNBC by phone, said the shooter fired randomly into the crowd.

"All of a sudden there was a stampede," said Ms Tara Webber, 41, from Allentown, Pennsylvania, who was heading home after a four-day cruise to the Bahamas and was waiting with relatives in Terminal 3 for her flight.

Those who were not running, she said, "hit the floor."

She and her father, Mr Dan Trinkle, 63, dove under a set of plastic chairs. Ms Webber said she almost landed on a little girl, who was crying, and tried to comfort her.

"This was the scariest thing I've ever done in my life," said Ms Webber, who works for her father's limousine company. "We're going to get a car and drive all the way home."

Her father said he went for the floor like everyone else. "Then the cops told us to leave all our stuff and get out," he said. "Everything was thrown around all over the place."

Mr Trickle said the police and airport authorities seemed unsure of how to handle the situation.

"As far as I'm concerned they weren't prepared for something like this," he said. "We were all out on the runway for hours. It made no sense."

He said he and his family were allowed to leave after three hours and go to a hospital only because his girlfriend, Ms Barbara Keinert, 57, had left her insulin on the cruise ship and needed another shot.

The suspect's name was made public soon after the shooting by Senator Bill Nelson, a Florida Democrat, who said that he had learned the name from the administrator of the Transportation Security Administration, Mr Peter V. Neffenger. Mr Nelson said that Mr Neffenger had also told him that the suspect was in possession of a US military identification.

"Based on the preliminary reviewing of the footage tapes, he is a lone shooter," Ms Sharief said. "He is alive, he was not harmed, not shot."

Airport police officers chased the gunman through the terminal as he continued to fire before apprehending him unharmed near a departure gate and arresting him.

The scene that unspooled after shots rang out was intensely chaotic. Live TV showed government vehicles blocking the roads to and from the airport and scores of travellers milling on the tarmac, apparently having been evacuated from the building.

Some could be seen marching en masse across the pavement, wheeling bags behind them.

Moments later, the passengers would burst into movement, like frightened birds, running one way or another, apparently in reaction to concerns, which authorities later said were unfounded, that more attacks were underway.

A number of witnesses called in to television news programmes almost immediately after it happened. Mr Schlicher said he had been travelling with his wife and mother-in-law and were just retrieving their bags from a carousel when he heard the first shot.

"I wasn't sure what it was at first, but I saw the person right to my side fall to the ground, and I turned and looked and the shooter was in the centre hallway," he told MSNBC.

Mr Schlicher did not hear the shooter speak, and described him as slender, with dark hair, and possibly wearing a blue Star Wars-themed T-shirt.

Mr Schlicher said he and everyone around him dropped to the ground. "I put my head down and prayed," he said.

The shooting came as Florida lawmakers were preparing to consider legislation that would relax prohibitions on firearms. State laws allow for the purchase of rifles, handguns and shotguns without a permit, though a licence is required to carry a concealed weapon in the state.

The legislation, which was proposed last month, would eliminate some "gun free zones" in Florida - which currently include airport terminals, schools and government meetings. The bill was introduced by state Senator Greg Steube, a Republican and long-time opponent of gun-free zones.

As the false alarms subsided at the airport, the scene remained tense. Workers and passengers leaving the airport were searched by law enforcement personnel. Passengers who had been on planes on the tarmac were forced to stay in their seats, where they received updates from captains and crew members.

Television news stations showed video of medics taking care of a bleeding victim outside the airport. News helicopters showed hundreds of people standing on the tarmac as an ambulance drove by.

With the airport shut down, the Federal Aviation Administration said that flights headed to Fort Lauderdale had been delayed or diverted to other airports.

A number of travellers described harrowing moments of panic. Ms Melody Dorward and a colleague, Ms Amberly Buccholz, had just stepped off a Spirit Airways flight from Ohio when they got caught up in the tide of people who ran down the terminal.

They joined in and were directed out to the tarmac, clustered there with others, shifting from spot to spot.

Rumours of more gunfire spread through the crowd, with many convinced that they had heard shots.

"I called my family to say goodbye," said Ms Dorward, 22, an e-commerce worker, "to tell them I love them."

Others asked to borrow her cellphone to do the same.

The women said they were terrified on the tarmac, unsure of where to hide or whether a second gunman was loose. They were told to crouch down, making them think they could get shot at any moment.

"We felt like we were just sitting ducks," said Ms Buccholz, 27. "It was horrible."