TAOS, NEW MEXICO (REUTERS) - Geologists are keeping a close eye on the crater of Hawaii's Kilauea volcano and a lava-spouting cone on its flank for possible signs a nearly three-month eruption may be slowing.

Up until Thursday (July 26), Kilauea had not had an explosion in 53 hours, the longest break in such activity since May, government geologists said on the last in a series of regularly scheduled news briefings since the eruption began on May 3.

Down Kilauea's east side, a lava channel flowing from its fissure 8 cone has turned sluggish and its level has dropped, said US Geological Survey geologist Janet Babb.

Could the lava eruption in the south-east corner of Hawaii's Big Island be easing after destroying over 700 houses and forcing thousands to flee their homes?

"That really is the million-dollar question right now," said Dr Babb. "We're watching this closely. I think it all depends what we see after the next collapse (explosion) event."

Right on cue, a collapse explosion came during the news briefing, kicking out the equivalent energy of a 5.4-magnitude earthquake.

It was the 58th such event in the current eruption cycle as magma steadily drains from the volcano's summit lava reservoir, causing its crater to collapse.

The USGS released a report last week saying the eruption could last months or years and a main hazard was a possible collapse of fissure 8, or a blockage or breach in its lava channel, that could send some or all lava in a new direction.

Geologist Rick Hazlett of the University of Hawaii at Hilo said material breaking off the cone had so far been flushed down the channel in "lava bergs". 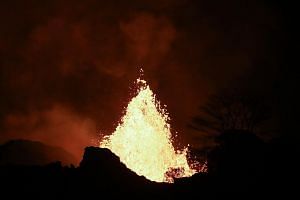 He did not see any more structures in danger, other than the Pohoiki boat landing, which is 152 metres from the lava.

"We're not very worried at the moment about the loss of further facilities," said Dr Hazlett. "This can be maintained for many months without the risks of a major diversion."

As to whether crater explosions are winding down, Dr Babb said it was too early to say.

"We need to wait and watch and see how the next collapses occur, to see if this interval between collapses is indeed increasing, or if this was an anomaly," she said.