WYOMING, Ohio (REUTERS) – Thousands of friends and family members gathered in suburban Cincinnati on Thursday (June 22) to say goodbye to an American student who died days after returning to the United States in a coma following 17 months in captivity in North Korea.

Otto Warmbier, 22, was arrested in the reclusive communist country while visiting as a tourist. He was brought back to the United States last week with brain damage, in what doctors described as state of  “unresponsive wakefulness,” and died on Monday.

Some 2,500 mourners attended a Thursday morning memorial at Wyoming High School. Warmbier graduated from the school in the Cincinnati suburb of Wyoming as salutatorian in 2013.

A hearse carried Warmbier’s casket from the school to a burial service at a local cemetery. Blue and white ribbons, the colors of Wyoming High School, were tied to the fence there.

The exact cause of Warmbier’s death is unclear. Officials at the University of Cincinnati Medical Center, where he was treated, declined to provide details, and his family asked the Hamilton County Coroner on Tuesday not to perform an autopsy.

Warmbier’s brother and sister spoke at Thursday’s memorial, as did a number of his friends, said attendee Fred Koss.

“I had to come out to support the family, and also just to show, in my opinion, the North Korean government that we are a dignified country, unlike them,” said Koss a 70-year-old Wyoming resident.

A programme for the memorial carried a quote from Andy Bernard, a character on the television show The Office: “I wish there was a way to know you’re in the good old days before you’ve actually left them.”

US student Otto Warmbier dies after release from North Korea 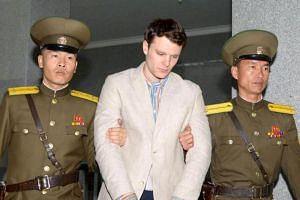 Family of Otto Warmbier, US man dead after being North Korea detention, asks for no autopsy

Warmbier was scheduled to graduate this year from the University of Virginia’s McIntire School of Commerce.

“He was able to connect with grown-ups and children, and he was one of those people that made you feel like you were his best friend, even though you had just met him,” said his college counsellor, Cynthia Meis, who attended the service.

“He was genuine and authentic, and so smart.”

Warmbier was travelling in North Korea with a tour group. He was arrested at Pyongyang airport as he was about to leave.

He was sentenced two months later to 15 years of hard labour for trying to steal an item bearing a propaganda slogan from his hotel, North Korea state media said.

Warmbier’s treatment was “appalling,” US Senator Rob Portman of Ohio told reporters outside the memorial.

North Korean officials told US envoys that Warmbier contracted botulism after his trial and lapsed into a coma after taking a sleeping pill. The family disbelieves that account.