SEATTLE (NYTIMES) - The man who stole a plane and flew it for about an hour Friday evening over Puget Sound in Washington state before crashing on an island has been identified as Richard B. Russell, according to a law enforcement official.

Russell, a ground service agent at the Seattle-Tacoma International Airport, took off around 8pm local time in an unauthorised flight, delaying dozens of flights as the airport enforced a temporary ground stop.

He flew around the Seattle-Tacoma area, chatting sometimes calmly and sometimes in a frenzied stream of consciousness with air traffic controllers who tried to guide him to a safe landing.

But the plane came down in a fiery crash on Ketron Island in Puget Sound, about 40km from the airport.

Alaska Airlines said in a statement that the person who took the plane was employed by Horizon Air, a subsidiary.

The aircraft was a 76-seat turboprop, a Q400, flying for Horizon.

No one else was believed to be on board and officials confirmed he was killed in the crash.

“I want to share how incredibly sad all of us at Alaska are about this incident,” Brad Tilden, chief executive of Alaska Air Group, said at a news conference on Saturday (Aug 11).

“Our heart is heavy for the family and friends of the person involved.”

Recordings of Russell’s conversation with air traffic controllers reveal that he was admiring the view of the Olympic Mountains at sunset, complaining of lightheadedness and musing about potential prison time if he were to land the plane safely.

He said he hoped to have a “moment of serenity” in the air but lamented that the sights “went by so fast.”

He also talked about doing a barrel roll and wondered whether the plane could do a back flip.

“I got a lot of people that care about me and it’s gonna disappoint them to hear that I did this,” he could be heard saying.

“I would like to apologize to each and every one of them. Just a broken guy, got a few screws loose, I guess. Never really knew it until now.”

At one point, a controller could be heard urging Russell to land the plane. 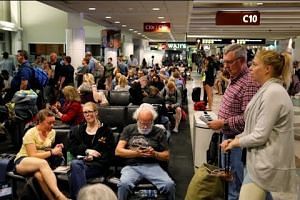 Debra Eckrote, chief of the north-west regional office of the National Transportation Safety Board, said on

Saturday that it was conceivable that a ground service agent would have access to aircraft.

At a news conference on Saturday, airline officials declined to publicly identify the employee.

Addressing the stolen plane’s flying manoeuvres, the chief executive of Horizon Air Industries, Gary Beck, said, “To our knowledge he did not have a pilot’s licence.”

“Commercial aircrafts are complex machines,” he added. “I don’t know how he achieved the experience he did.”

Alaska Airlines officials said Russell had worked for Horizon for three and a half years, and was responsible for handling luggage and cargo and for towing aircraft. He had worked his shift on Friday.

Russell had previously undergone a background check and was meant to be “on the secure side” of the airport, Tilden said.

Rick Christenson, an operational supervisor with Horizon, said that while he had met Russell only in passing between shifts, “I do remember him as a nice quiet young man.”

He added that Russell’s ability to fly might have come from “flight simulator games.”

In a video that appears to have been posted by Russell in December, he introduced himself as a ground service agent. “That means I lift a lot of bags,” he said. “Like, a lot of bags. So many bags.”

But “it allows me to do some pretty cool things, too,” he added, segueing to footage of a flight tour over Ketchikan, Alaska, followed by images of several countries including France, Ireland and Mexico.

Most importantly, he concluded, “I get to visit those I love most.”

The FBI is leading the investigation into the episode.

“We are going to be thorough, which means taking the time needed to scour the area, delve into the background of the individual believed responsible, and review every aspect of this incident with all appropriate public and private partners,” the agency’s Seattle field office said in a statement..