BEIRUT (NYTIMES) - Saudi Arabia has collected more than US$100 billion (S$131.2 billion) from prominent citizens who were detained in what the government has called a widespread crackdown on corruption, the kingdom said on Tuesday (Jan 30).

Sheikh Saud al-Mojeb, the attorney general, said in a statement that 381 people had been summoned as part of the investigation.

Many were brought in as witnesses, while others were accused of corruption and released only after handing over significant assets to the government, the statement said.

The release of many of the detainees appeared to signal the wrapping up of the 2½-month campaign, in which some of the kingdom's richest and most powerful men were locked in the Ritz-Carlton Hotel in Riyadh, the Saudi capital, where the authorities pressed them to hand over assets said to have been stolen from the state.

The detainees included businessmen, current and former government ministers, and at least 11 princes, including Alwaleed bin Talal, the kingdom's most famous investor, who was released on Saturday.

The government has framed the campaign as an attempt to reclaim ill-gotten gains while sending a message that the endemic corruption that has long plagued the Saudi economy is coming to an end. Cleaning up bad business practices, the government said, was a major part of efforts by Mohammed bin Salman, the kingdom's 32-year-old crown prince, to reform the kingdom.

But the opacity of the process has led others to call it a shakedown. 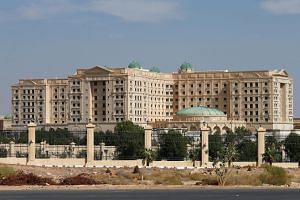 Saudi Arabia squeezes detainees as it tries to seize assets

Citing privacy laws, the government has not identified the detainees, detailed the charges against them or stated what they handed over in order to secure their release. But the statement released on Tuesday said the government had claimed about 400 billion Saudi riyals, or US$106.6 billion, so far. That sum included real estate, commercial entities, cash and other assets, the statement said.

It remained unclear when the government's campaign would actually end. Prince Mohammed is expected to travel to Washington in late February or early March, and many suspect that he wants to finish the process before then so as not to face questions about the detentions.

The Riyadh Ritz-Carlton, which has effectively served as the world's most luxurious jail, has resumed taking reservations as of Feb 14.