“Each of us has an ego, each of us has an agenda. But looking at the country, which is so precious to us, being torn apart, we put our egos aside, created a single agenda, formed one party,” Gantz said in a speech to supporters.

Should their new party, named Blue and White after the colours of the Israeli flag, emerge as the largest and secure a majority coalition in parliament, Gantz and Lapid have agreed on a rotation for the prime minister’s post – Gantz holding the office for two-and-a-half years before Lapid takes over.

In their campaigns, both candidates have portrayed Netanyahu, who would become Israel’s longest-serving prime minister this summer if he wins the April 9 ballot, as haughty with power and criminally corrupt.

In response, Netanyahu appealed to his right-wing base, warning that his opponents would make far-reaching concessions to the Palestinians that would “endanger” Israel and ruin the economy.

He told potential swing voters: “Do not be tempted.” 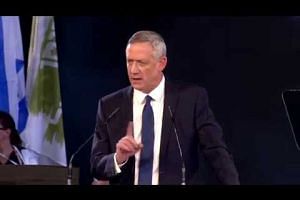 “It’s important that we continue to lead the country our way, on a path of success, security, prosperity. But tonight I want to tell you honestly, it’s not at all a sure thing,” Netanyahu said in a speech broadcast in prime time.

Two polls released late on Thursday on Israeli TV channels predicted Blue and White winning 36 seats in the 120-member parliament, with Likud getting 26 in one survey and 30 in the other.

After the ballot, the biggest party will likely be chosen to form a governing coalition, but the polls showed a number of smaller parties hovering around the cut-off line, pointing to no clear right- or left-wing majority.

While Gantz and Lapid worked out their deal, Netanyahu helped negotiate the merger of two far-right parties, Jewish Home and Jewish Power, that could give followers of the late anti-Arab rabbi, Meir Kahane, a stronger voice in politics and help the prime minister in coalition-building.

Netanyahu faces possible indictment in three corruption investigations. He denies any wrongdoing and has said he will remain in office even if Israel’s attorney-general decides to accept police recommendations to indict him.

But political commentators have said coalition partners might press for him to step down.

The prime minister is suspected of wrongfully accepting gifts from wealthy businessmen and dispensing favours in alleged bids for favourable coverage by a newspaper and a website.