BEIRUT (AFP) - The fall of Raqa has boxed the Islamic State in Iraq and Syria (ISIS) group into a small "rump caliphate" straddling the Iraqi-Syrian border, a remote but strategically key area its enemies are keen to seize.

But even as its proto-state crumbles in the face of multiple assaults, experts warn ISIS remains a potent threat whose ideology is likely to endure long after its "caliphate" is gone.

After more than four months of fighting to retake Raqa, the US-backed Syrian Democratic Forces declared the city liberated on Tuesday (Oct 17), seizing what was once the militants' de facto Syrian capital.

The loss is only the latest in a string of blows against ISIS, which has lost swathes of territory to the SDF, the Syrian regime and to Iraqi forces the other side of the border.

With the loss of Raqa, the "would-be caliphate of ISIS that at its height in 2014 threatened to rule all of Syria from Aleppo to the Iraqi border will be cut down to a dwarf territory in Deir Ezzor," said Nicholas Heras, a fellow at the Center for a New American Security.

The eastern Syrian province, which borders Iraq, "will be the centre of gravity for ISIS in Syria," he said.

"ISIS always intended for Deir Ezzor and its neighbouring area... to be the last stronghold of the caliphate."

The province's remote location in "harsh desert" far from both Damascus and Baghdad makes it the perfect place for a last stand, he added.

But the militants are already under attack across the province, and losing territory to two separate campaigns.

The first, on the eastern bank of the Euphrates river that slices diagonally across the province, is being waged by the SDF with US-led coalition support.

The second is a Russian-backed Syrian regime operation, which has already broken a nearly three-year siege of government-held parts of provincial capital Deir Ezzor city and seized the strategic town of Mayadeen.

IMPACT FOR 'YEARS TO COME'

"I think the Iraqi and Syrian governments will work to secure the whole border, knowing that neglect of the porous border area will only abet ISIS in the future," said Aymenn Jawad al-Tamimi, an expert on Islamic militants.

For Syria's regime and its ally Iran, a victory in the area would be doubly valuable, cutting off further advances by the US-backed SDF and ensuring Washington cannot block Iran's land route through Iran into Syria and neighbouring Lebanon. 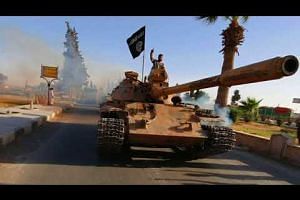 Despite suffering major losses of territory, ISIS will remain a dangerous threat for the foreseeable future, experts say.

"The awful truth is that ISIS will be just as deadly as an insurgency and a terrorist network as it was as a state-like actor," Heras said.

Tamimi said the group would likely use raids, sleeper cells, improvised explosive devices and suicide bombings even after its core territory has disappeared.

"Attacks in Europe will continue for some time. I think the defeat of ISIS as a state project does diminish its appeal, but there will be supporters for a long time to come," he said.

Charlie Winter, a senior research fellow at the International Centre for the Study of Radicalisation and Political Violence, warned that the ideology of ISIS would linger long after its "caliphate" was gone.

He said the group saw itself as successful, having "managed to declare a caliphate and keep it going" - something unprecedented in modern jihadism.

That, he added, "will have an impact on the global jihadist spectrum for years and years to come".