The following are key takeaways from the Intergovernmental Panel on Climate Change's special report on 1.5 deg C released on Monday (Oct 8)

1. Human activities are estimated to have caused approximately 1 deg C of global warming above pre-industrial levels, with a likely range of 0.8 deg C to 1.2 deg C. Global warming is likely to reach 1.5 deg C between 2030 and 2052 if it continues to increase at the current rate.

2. Warming from anthropogenic emissions from the pre-industrial period to the present will persist for centuries to millennia and will continue to cause further long-term changes in the climate system, such as sea level rise, with associated impacts, but these emissions alone are unlikely to cause global warming of 1.5 deg C.

3. Climate-related risks for natural and human systems are higher for global warming of 1.5 deg C than at present, but lower than at 2 deg C. These risks depend on the magnitude and rate of warming, geographic location, levels of development and vulnerability, and on the choices and implementation of adaptation and mitigation options.

1. Climate models project robust differences in regional climate characteristics between present-day and global warming of 1.5 deg C, and between 1.5 deg C and 2 deg C. These differences include increases in: mean temperature in most land and ocean regions, hot extremes in most inhabited regions, heavy precipitation in several regions, and the probability of drought and precipitation deficits in some regions.

2. By 2100, global mean sea level rise is projected to be around 0.1m lower with global warming of 1.5 deg C compared to 2 deg C. Sea level will continue to rise well beyond 2100, and the magnitude and rate of this rise depends on future emission pathways. A slower rate of sea level rise enables greater opportunities for adaptation in the human and ecological systems of small islands, low-lying coastal areas and deltas.

3. On land, impacts on biodiversity and ecosystems, including species loss and extinction, are projected to be lower at 1.5 deg C of global warming compared to 2 deg C. Limiting global warming to 1.5 deg C compared to 2 deg C is projected to lower the impacts on terrestrial, freshwater, and coastal ecosystems and to retain more of their services to humans.

1. In model pathways with no or limited overshoot of 1.5 deg C, global net anthropogenic (human-produced) CO2 emissions decline by about 45 per cent from 2010 levels by 2030, reaching net zero around 2050. For limiting global warming to below 2 deg C, CO2 emissions are projected to decline by about 20 per cent by 2030 in most pathways and reach net zero around 2075. Non-CO2 emissions (such as methane) in pathways that limit global warming to 1.5 deg C show deep reductions that are similar to those in pathways limiting warming to 2 deg C.

2. Pathways limiting global warming to 1.5 deg C with no or limited overshoot would require rapid and far-reaching transitions in energy, land, urban and infrastructure (including transport and buildings), and industrial systems. These systems transitions are unprecedented in terms of scale, but not necessarily in terms of speed, and imply deep emissions reductions in all sectors, a wide portfolio of mitigation options and a significant upscaling of investments in those options.

3. All pathways that limit global warming to 1.5 deg C with limited or no overshoot project the use of carbon dioxide removal (CDR) on the order of 100 to 1,000 billion tonnes of CO2 over the 21st century. CDR would be used to compensate for residual emissions and, in most cases, achieve net negative emissions to return global warming to 1.5 deg C following a peak. CDR deployment of several hundreds of billions of tonnes of CO2 is subject to multiple feasibility and sustainability constraints. Significant near-term emissions reductions and measures to lower energy and land demand can limit CDR deployment to a few hundred billion tonnes of CO2 without reliance on bioenergy with carbon capture and storage (BECCS).

D. Strengthening the Global Response in the Context of Sustainable Development and Efforts to Eradicate Poverty

1. Estimates of the global emissions outcome of current nationally stated mitigation ambitions as submitted under the Paris Agreement would lead to global greenhouse gas emissions in 2030 of 52-58 billion tonnes of CO2-equivalent per year. Pathways reflecting these ambitions would not limit global warming to 1.5 deg C, even if supplemented by very challenging increases in the scale and ambition of emissions reductions after 2030. Avoiding overshoot and reliance on future large-scale deployment of carbon dioxide removal (CDR) can only be achieved if global CO2 emissions start to decline well before 2030. 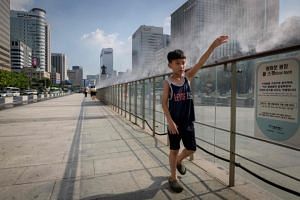 UN report on climate change: Some facts about IPCC and the report

2. The avoided climate change impacts on sustainable development, eradication of poverty and reducing inequalities would be greater if global warming were limited to 1.5 deg C rather than 2 deg C, if mitigation and adaptation synergies are maximised while trade-offs are minimised.

3. Adaptation options specific to national contexts, if carefully selected together with enabling conditions, will have benefits for sustainable development and poverty reduction with global warming of 1.5 deg C, although trade-offs are possible.

4. Mitigation options consistent with 1.5 deg C pathways are associated with multiple synergies and trade-offs across the Sustainable Development Goals (SDGs). While the total number of possible synergies exceeds the number of trade-offs, their net effect will depend on the pace and magnitude of changes, the composition of the mitigation portfolio and the management of the transition.

5. Limiting the risks from global warming of 1.5 deg C in the context of sustainable development and poverty eradication implies system transitions that can be enabled by an increase of adaptation and mitigation investments, policy instruments, the acceleration of technological innovation and behaviour changes.

6. Sustainable development supports, and often enables, the fundamental societal and systems transitions and transformations that help limit global warming to 1.5 deg C. Such changes facilitate the pursuit of climate-resilient development pathways that achieve ambitious mitigation and adaptation in conjunction with poverty eradication and efforts to reduce inequalities.

7. Strengthening the capacities for climate action of national and sub-national authorities, civil society, the private sector, indigenous peoples and local communities can support the implementation of ambitious actions implied by limiting global warming to 1.5 deg C. International cooperation can provide an enabling environment for this to be achieved in all countries and for all people, in the context of sustainable development. International cooperation is a critical enabler for developing countries and vulnerable regions.