EDINBURGH/LONDON (AFP) - A barrage of nationwide protests will greet US President Donald Trump's four-day trip to Britain from Thursday (July 12), with organisers hoping to stage one of the country's biggest demonstrations in decades following a series of diplomatic spats.

The divisive American leader, arriving after a NATO summit in Brussels, will be largely away from London during a tour expected to bring at least tens of thousands of people onto British streets.

"We are confident that there will be huge demonstrations against Trump wherever he visits," said Mr Chris Nineham, of the Stop the War Coalition, which is helping to stage the so-called "carnival of protest".

"The protest against Trump will be a real celebration of the diversity that we love in the UK - and will give a strong signal that his message of hate and division is not welcome in this country."

The US president appears unpopular in Britain, where his brash style and hardline "America First" policies have caused consternation across the political spectrum and society.

Opposition lawmakers, backed by an online petition signed by nearly 1.9 million people, called on Mrs May to cancel the state visit offered when she met Mr Trump in Washington after his inauguration in January last year. 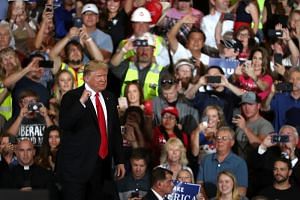 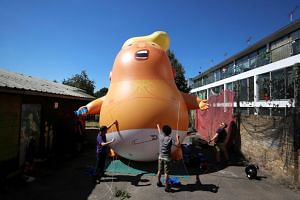 Giant 'Trump Baby' to fly over London during US president visit

Following the incident and several other diplomatic spats, his first trip to Britain since taking power was repeatedly delayed and scaled back, with speculation it has now been designed to avoid the demonstrations.

The US ambassador in London told reporters last Friday that Mr Trump was aware of the planned protests but "is not avoiding anything".

"The president is simply trying to get as impactful a trip as he can get in a 24-hour period," Mr Woody Johnson said.

The centrepiece of the organised opposition will be a march through central London ending in a rally on Trafalgar Square.

Organisers are laying on buses from more than a dozen British cities to the protest, urging attendees to "bring banners, loudhailers, sound systems and everything you need to kickstart the revolution".

A giant inflatable "Baby Trump" balloon will be flown near the Houses of Parliament ahead of the protest.

The blimp will then be used at a protest planned in Scotland, the homeland of Mr Trump's mother, when he goes there for the weekend.

London Mayor Sadiq Khan, who has sparred with Trump online over combating terrorism, has permitted the floating blimp for two hours on Friday morning.

Firebrand politician and Trump ally Nigel Farage labelled the move "the biggest insult to a sitting US President ever" but others have welcomed the playful rebuke.

"For a US president who retweets far-right Britain First propaganda, insults Londoners at times of tragedy, and refuses to condemn white supremacist marches at home, this insult is well deserved" said Labour MP David Lammy.

The "Stop Trump Coalition", a network of grassroots campaigns, unions, NGOs and politicians, said in a statement on Facebook that Friday "could be a march of millions".

It pointed to polling last year showing up to two million people could take part in anti-Trump actions.

Mass protests in 2003 against the Iraq War saw an estimated record 750,000 to two million turn out in London.

Mr Trump will be holding talks at that time with Mrs May at Chequers, the 16th-century manor house outside London that serves as her official country retreat.

The coalition has pledged multiple demonstrations along every step of his planned itinerary, which will include meeting Queen Elizabeth II at Windsor Castle on Friday.

It has vowed to gather near the US ambassador's residence in London, where Mr Trump and First Lady Melania Trump will stay on Thursday night, and outside Blenheim Palace, wartime leader Winston Churchill's birthplace, which hosts the pair for dinner prior.

In Scotland, a major demonstration is planned in Glasgow, its biggest city, on Friday ahead of a march through the streets of Edinburgh, the capital, on Saturday.

Protestors will be on standby to race to one of Mr Trump's two golf resorts in Scotland in case he visits.

Mr Richard Leonard, leader of the Scottish Labour Party, has been a key figure in mobilising against the president.

"Trump's political values represent everything that we are not," he told Agence France-Presse. "He is misogynist, Islamophobic, a climate-change denier, anti-trade union, his foreign policy forays have been troubling and he is clearly a racist president."

He added: "I don't think we should roll out the red carpet for somebody that holds such abhorrent views."