LONDON (REUTERS) - British lawmakers on Tuesday (Jan 29) instructed Prime Minister Theresa May to demand that Brussels replace the Irish border arrangement known as the “backstop”, in a last-ditch attempt to renegotiate an exit treaty that the European Union says it will not change.

The amendment, put forward by influential Conservative lawmaker Graham Brady, passed by 317 votes to 301, and is intended to strengthen Mrs May’s hand when she returns to Brussels to try to renegotiate – something the EU again ruled out within minutes of the vote.

With two months left until Britain is due by law to leave the EU, investors and allies have urged the British government to clinch a deal to allow an orderly exit from the club it joined in 1973.

“Tonight, a majority of honourable members have said they would support a deal with changes to the backstop,” Mrs May said, only two weeks after her divorce deal was crushed in the biggest parliamentary defeat in modern British history.

“It is now clear that there is a route that can secure a substantial and sustainable majority in the house for leaving the EU with a deal,” Mrs May said, adding that she would seek “legally binding changes”.

The amendment calls for the backstop to be replaced with unspecified “alternative arrangements” to avoid the reintroduction of border checks in Ireland, and says Parliament would support Mrs May’s Brexit deal if this change were made.

However, Brussels has repeatedly said it does not want to reopen the treaty, which has been signed off by the other 27 EU leaders, and has said the “backstop” is needed as a guarantee to ensure there can be no return to a hard border between Ireland and the British province of Northern Ireland. 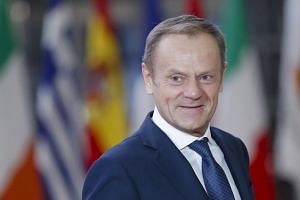 Speaking immediately after the vote in the British Parliament, a spokesman for European Council President Donald Tusk said the backstop was part of the withdrawal deal and was not up for negotiation. 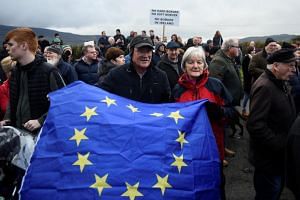 Lawmakers rejected two amendments setting out a path for Parliament to prevent a no-deal exit if Mrs May cannot get a deal passed next month. However, they later approved a symbolic proposal calling on the government to stop a potentially disorderly no-deal exit.

The so-called Spelman Amendment, passed by 318 votes to 310, “rejects the United Kingdom leaving the European Union without a Withdrawal Agreement and a Framework for the Future Relationship”.

It sends a signal that Parliament as a whole opposes leaving the EU without a negotiated agreement, which will happen by default on March 29 if no alternative is agreed, but does not compel the government to prevent such a departure or provide a mechanism for doing so.

The sterling, which recently hit a 2½-month high of US$1.3218 on hopes that a no-deal Brexit would be avoided, fell about 0.7 per cent after lawmakers voted down efforts to prevent a no-deal exit.

Opposition Labour Party leader Jeremy Corbyn said he would meet Mrs May to “find a sensible Brexit solution that works for the whole country”, listing changes that Labour wanted to see.