LONDON (NYTIMES) - He is the bane of bankers, a bearded, teetotaling socialist often derided in the British press and in Parliament for his efforts to suppress dissent inside the Labour Party and his radical plans to remake the British economy.

But in the unmitigated chaos of Brexit, Mr Jeremy Corbyn, the opposition Labour leader, is trying to remint himself as a safe pair of hands, and an unlikely salve to jittery British markets panicked by Prime Minister Boris Johnson's plans for an abrupt split with the European Union.

"'What method of execution would you prefer?' is basically the question," said Mr David Willetts, a Conservative former minister who was once an aide to Mrs Margaret Thatcher.

"Corbyn would in normal circumstances look like an off-the-scale risky gamble. However, Brexit is the single biggest change in Britain's economic and political relations in 40 years, so Brexit itself is an off-the-scale economic gamble."

With an early election looming, Mr Johnson's Conservative Party, once a friend to big business and a refuge for establishment figures of all types, has torched one convention after another, creating dust-ups with Queen Elizabeth II, the Supreme Court and Parliament. The prime minister's proposed Brexit deal, proffered last week to Brussels, was met with so much dismay that most analysts believe he is fully resigned to Britain leaving the bloc without one.

That has turned Mr Corbyn - a lifelong rabble-rouser and one of the most left-wing leaders in Labour's century-long history - into an improbable figure of restraint. He is implacably opposed to a no-deal Brexit and promises a second referendum that could reverse the split altogether.

Suddenly, banks have been left grudgingly weighing the benefits of a party run by neo-Marxists, radical union leaders and lawmakers with a history of supporting communist regimes.

And some parts of Labour, famously anti-establishment under Mr Corbyn, are fretting that they will somehow look like the soberer party in an election dominated by voters' desire for a shake-up.

"The Tories are promising the most radical and extreme economic disruption in nearly 200 years," said Mr Tom Kibasi, the director of the left-leaning Institute for Public Policy Research, calling a no-deal Brexit the biggest upheaval since the British Empire abolished slavery in the 1830s.

"The scale of economic chaos the Tories are promising means that any of Labour's policies pale in significance."

But, he said: "The issue is right now the public have a clear appetite for change. The question is, are you going to offer them positive change, or change that's chaos and disruption?"

Mr Corbyn's new sheen of acceptability has not yet paid dividends with the public. In carving out the middle ground on Brexit - promising a second referendum, but refusing to commit to one side or the other - he has alienated both Leave and Remain voters. And analysts say it is not clear whether Mr Corbyn's plans for a generational reordering of the economy will cut through as long as voters remain obsessed with Brexit. 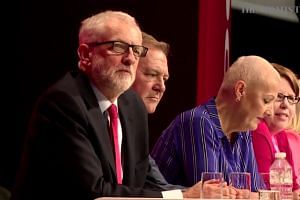 Despite his involvement in efforts to avert a no-deal Brexit, Mr Corbyn is still despised by a cohort of anti-Brexit lawmakers, some of whom blame him for failing to get a grip on anti-Semitism in the Labour Party. Those lawmakers have resisted trying to unseat the government and install him as a caretaker prime minister.

But in Britain's winner-take-all voting system, Labour is still the party best positioned to wrench power from the Conservatives. That has narrowed the choice awaiting Britain, some analysts say: a Johnson-led government increasingly bent on a no-deal Brexit, or a Corbyn-led government that would stop it.

And even for some of Mr Corbyn's biggest foes, that is an easy choice to make.

Mr Ken Clarke, a Conservative former chancellor of the Exchequer who has locked horns with Labour for decades, said last month: "Both are awful prospects, but I think a no-deal Brexit could cause far more damage to our future economic success than Corbyn."

Even in the city of London, there is growing feeling that the financial industry could withstand the shock of Mr Corbyn's hard-left economic plans if that were what it had to do to avoid Britain leaving the European Union without a deal managing future relations. For financial analysts, there is nothing that tempers fears of Labour's plans to redistribute wealth and assets like an even more daring economic experiment: cutting adrift an export market of half a billion people.

"Between a Corbyn government that delivers a second referendum at the cost of some policies which from an economic perspective we may not be entirely happy with, and a Conservative government that is broadly pro-business but does the irreversible damage of the UK leaving without a deal, I'd choose the former," said Mr Christian Schulz, an analyst for Citi.

Mr Peter Dixon, a senior economist for Commerzbank, said companies could adjust to Mr Corbyn, but not as easily to the sudden turmoil of a no-deal Brexit.

"They're looking at the prospect of a no-deal and saying, actually, this would be an even bigger shock to the economy than a Corbyn government because perhaps at least you'd have a period of time to adjust," he said.

For Britain's financial district, it is the end of an era of being able to freely hammer Labour for moderate tax increases, safe in the knowledge that the Conservative Party would follow market orthodoxy on open trading arrangements.

"The markets can't have their cake and eat it," said Mr Paul Dales, the chief UK economist for Capital Economics, a research company.

Mr Corbyn, a vegetarian with a grandfatherly manner who for decades wandered the hard-left hinterlands of the Labour Party, has not made himself many friends in the City of London with a series of bold proposals he has rolled out over the last few weeks: creating a state-owned pharmaceutical company, attacking private schools, forcing companies to make their workforces into shareholders.

He also wants to nationalise the railways, raise new taxes on the financial industry and create a four-day workweek.

Those policies could permanently undo the anti-regulatory crusade waged 40 years ago by Mrs Thatcher, cementing high-tax, pro-workforce rules. Labour supporters hope these measures will address gaping inequality, while critics fear they are built on an outdated vision of Britain's economy.

It's still, to many if not most bankers, a programme that looks politically repugnant and personally costly. And the calculation that it might be less catastrophic to banks than a no-deal Brexit remains hotly contested in some circles.

But analysts say the markets have taken comfort in the fact that even if Mr Corbyn performs well in the next election, he will probably not win enough seats in Parliament to govern alone. Being forced to rely on the backing of one or more smaller parties, like the centrist Liberal Democrats or the economically centre-left Scottish National Party, would rein in Labour's most radical plans.

Labour has also made a concerted, if low-key, effort in recent months to prepare the financial industry for a turnover in Downing Street. Industry representatives say they have largely left impressed by Mr John McDonnell, Labour's Treasury spokesman, describing him as solicitous of their needs when it comes to Brexit and matter-of-fact in laying out his party's more confrontational economic plans.

"John McDonnell is someone they can talk to, do business with," said Lord Robert Kerslake, a former civil service chief who has set up some of Labour's meetings with businesspeople.

(Bankers cannot, though, buy dinner for Mr McDonnell, who has protected his abstemious reputation - and the party's anti-elite bona fides - by insisting on "tea and biscuits, nothing else," Lord Kerslake said. That is a contrast with the "prawn cocktail offensive" that a more corporate Labour Party waged under Mr Tony Blair in the City of London two decades ago.)

Labour's rehabilitation in the eye of the markets mirrors a lift that leftist parties have gotten across Europe simply for treading cautiously on European trade. Facing up against right-wing, populist campaigns against European integration, left-wing parties, said Mr Schulz, the Citi analyst, are finding that "their pro-Europe credentials ultimately trumped question marks about their economic policies".

Whatever respectability Mr Corbyn has won in the bare-knuckled fight over Brexit may not last long. One of his biggest selling points for bankers, after all, is that some of them think they can reverse his policies within a matter of years. And some of his grudging Conservative backers, like Mr Guto Bebb, a former junior defence minister, have in mind nothing more than "a short-term Jeremy Corbyn government" that would avert what he called "the generational damage that would be caused by a no-deal Brexit".

Mr Corbyn's more immediate problem is not only pitching himself as a sober option in an era of political madness, but also how to make his proposals stand out amid fervent campaigning on Brexit on all sides.

Mr Johnson, analysts say, has a slew of ready-made slogans for his anti-establishment, no-holds-barred Brexit campaign, even if they disguise the tumult that is almost sure to follow. Mr Corbyn, on the other hand, has to make a knottier case for caution on Brexit.

"It depends whether the Tories are found out or not," Mr Kibasi said. "Labour's story is more complicated, if more truthful."