BERLIN (AFP) - A 49-carat diamond which analysts estimate to be worth up to US$12 million (S$16.4 million) was among over a dozen jewel-encrusted items snatched from a German state museum in a spectacular heist, the museum confirmed Wednesday (Nov 27).

Publishing a list of the pieces taken in Monday's brazen raid, the Green Vault museum at Dresden's royal palace said the items stolen included a sword whose hilt is encrusted with nine large and 770 smaller diamonds, and a shoulderpiece which contains the famous 49-carat Dresden white diamond.

Eleven pieces were removed completely, while individual parts of a further three items were also missing.

The Dresden white is one of the most precious jewels in the collection of former Saxon ruler August the Strong.

Tobias Kormind, managing director of the diamond retailer 77Diamonds, told AFP that it could be worth up to US$10 or US$12 million, adding that thieves would have "hit the jackpot" if they did take it.

"None of the diamonds would have been in themselves extra special except for the one large Dresden White," he said.

The 49-carat diamond was cut in the early 18th century and bought at great expense by August the Strong, then Elector of Saxony, in 1728.

In dramatic CCTV footage released by police on Monday, one of the suspects can be seen using an axe to break into the display case containing three diamond jewellery collections. 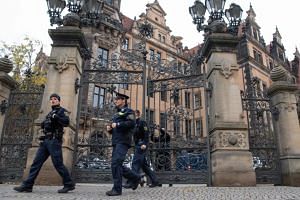 The thieves launched their audacious raid in the early hours of Monday morning, instigating a partial powercut before breaking through a window protected by iron bars.

They then headed straight for the display cabinet in what police said was a "targeted and premeditated crime".

Police said Wednesday that after studying the video material, they now believed that there were four perpetrators in total.

Having called for witnesses to come forward earlier in the week, the investigative commission said they had received 205 tip-offs from the public by Wednesday afternoon.

Dresden police chief Joerg Kubiessa told broadcaster ZDF that a "criminal gang" may be behind the robbery.

Dresden police said they were also in contact with colleagues in Berlin to explore possible connections to a similar heist in the capital two years ago.

Four men with links to a notorious Berlin gang were later arrested and put on trial.

The coin has never been recovered, and fears are growing that the Dresden treasures will also remain lost forever.​

Thieves grab jewels, treasures worth 'up to a billion euros' in Dresden