MAGNANVILLE, France (AFP) – A convicted radical who killed a French police couple in an ISIS-inspired stabbing, was carrying a “hit list” of VIPs, police and journalists and urged followers to turn Euro 2016 into a “graveyard”, officials said Tuesday (June 14).

Monday’s assault in a small town northwest of Paris was the first deadly strike in France since the coordinated attacks in the capital by an Islamic State in Iraq and Syria (ISIS) cell in November, which killed 130 people.

Larossi Abballa, 25, who was under surveillance after serving time for his links to terrorist networks, first stabbed the 42-year-old police officer outside his home before going inside and taking his partner and their three-year-old son hostage. 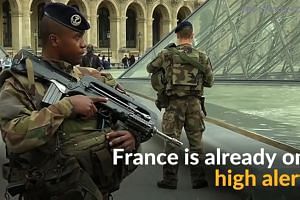 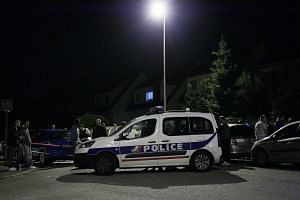 He then killed the 36-year-old mother, slitting her throat, before posting on Facebook a live 13-minute video of himself inside the house with the child in which he admits the murders and urges fellow jihadists to carry out more bloodshed.

He was later killed during a police raid which ended the standoff in the town of Magnanville.

The child escaped unharmed but in shock.

Anti-terrorism prosecutor Francois Molins said Abballa, 25, who came from the nearby suburb of Mantes-la-Jolie, told police negotiators before his death that had had sworn fealty to ISIS three weeks earlier.

He told negotiators he was responding to a call by ISIS leader Abu Bakr al-Baghdadi to “kill infidels, at home, with their families.” ISIS claimed Monday’s attack in a statement issued by the Amaq news agency, a regular conduit for ISIS announcements.

Molins said police had a found a hit list in the house of VIPs and professions to be targeted, namely police, journalists and rappers.

They also found three knives, one of which was covered in blood.

Three men from Abballa’s entourage have been arrested over the attack, Molins said.

One of the three was among seven people convicted alongside Abballa in 2013 over their involvement in a network recruiting jihadists for Pakistan, Molins added.

Abballa, who had been known to police as a youth for petty crime, spent over two years in custody.

More recently, he was investigated in connection with a network recruiting jihadists to fight in Syria. His wiretapped conversations gave no indication he was planning an attack, however, Molins said.

Monday’s stabbings comes with France on high alert during the Euro tournament, with up to 90,000 police and security guards deployed to ensure the safety of local and visiting fans.

In his Facebook video, which was seen by AFP, Abballa called on supporters to attack to attack police, journalists, public figures, prison guards and rappers and to “turn the Euro into a graveyard.” The video was later removed.

The killings took place barely 36 hours after a gunman claiming to be acting in the name of ISIS shot dead 49 people at a gay nightclub in Orlando, Florida in the worst mass shooting in US history.

The grisly knife assault, which President Francois Hollande condemned as “cowardly”, followed several attacks on the French army and police in the past three years, including a number of stabbings by so-called lone wolf operatives. 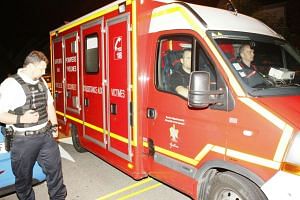 The slain policeman was based at a station in the western Paris suburb of Les Mureaux. His partner had an administrative police job.

Their deaths are the first police fatalities in a terrorist attack since January 2015 when gunmen attacked a satirical newspaper, a Jewish supermarket and the police, claiming the lives of 17 people, among them three officers.

A month later, three soldiers protecting a Jewish community centre in the French Riviera city of Nice were attacked by a man with a knife.

Interior Minister Bernard Cazeneuve said Monday’s killings showed the gravity of the threat to security forces “who are paying a heavy price to ensure the safety of the French”.

Hollande said the threat level was “very high everywhere” and that the government had mobilised “significant resources, both in the police and in intelligence services” to defend the country.

The Magnanville bloodshed began shortly before 9 pm local time  on Monday when Abballa attacked the officer, who was in plainclothes, stabbing him repeatedly outside his home.

Witnesses told investigators the man shouted “Allahu akbar” (God is greatest) as he knifed his victim.

Police moved in to evacuate residents, block off roads and launch negotiations with the suspect.

Loud blasts and shots were later heard around midnight as elite RAID police launched an assault after the dialogue failed.