LONDON (AFP) - British Prime Minister Theresa May will on Saturday (March 17) address members of her Conservative Party, rejuvenated by the widespread praise for her handling of the Russian spy crisis but still dogged by Brexit.

May's last major party conference speech ended in disaster as a cough, a prankster and a collapsing backdrop undermined her address - intended to restore her authority following last year's disastrous snap general election in which the Conservatives lost their parliamentary majority.

A pre-Christmas breakthrough with the European Union in Brexit negotiations gave her a boost, but she was again under pressure after pro-EU rebels within her centre-right party delivered her a stinging parliamentary defeat.

However, she comes into the Conservatives' spring forum in London with renewed authority following her firm response to the poisoning of a former Russian double agent on British soil, which she blames on Moscow.

Her decision to expel 23 Russian diplomats and suspend high-level contacts received cross-party and media support, but more importantly rallied the Conservatives, heralding a ceasefire in the bitter internal row over Brexit.

Leading pro-EU rebel Anna Soubry praised the "wise words and the leadership of the prime minister but also her firm actions".

Mrs May, who earned the nickname "Maybot" for her awkward interactions with the public, even "fist-bumped" a well-wisher and had people shout her name in praise as she visited the site of the poisoning in Salisbury, southwest England. 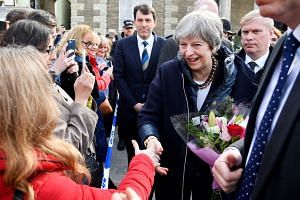 But behind the bravado, members will still be scrutinising her every word on leaving the EU.

The party's pro-Brexit supporters are ready to jump on any apparent concessions to Brussels, while its pro-EU faction is applying pressure to maintain strong links with the bloc.

The government's domestic agenda will also be under the spotlight.

Mrs May, 61, was to insist that the Conservative Party "cares deeply" about public services, and speak about the impact the state has had on her life.

She was to tell the party, in office since 2010, that it "must mount a determined effort" to "win and keep" the public's trust in its management of public services.

"Some people question our motives. They wonder whether we care enough about our NHS (National Health Service) and schools," she was to say, according to released extracts of her speech.

"Whether we truly respect the people who work in them. And understand that people rely on them.

"I know what our answer would be. Everyone in this party cares deeply about our public services. We use them. Many of us rely on them." The forum also follows finance minister Philip Hammond's key budget update earlier this week.

Hammond heralded the British economy's relative resilience in the face of Brexit, and said Mrs May's minority government was making "solid progress towards building an economy that works for everyone".

A YouGov poll of 1,986 adults for The Times newspaper out Friday put the Conservatives on 42 per cent support and the Labour main opposition on 39 percent.

Sixty per cent supported, and 14 per cent opposed, the measures Mrs May has taken, such as expelling the Russian diplomats.