LONDON (BLOOMBERG) - Boris Johnson is heading for a clear victory in next week'sBritish general election, according to senior officials in both his ruling Conservatives and the main opposition Labour Party.

Speaking on condition of anonymity, a group of five senior figures drawn from the two biggest parties said Johnson's campaign promise to "get Brexit done" was winning ground in the Labour heartlands in northern England.

The officials are familiar with the high-level discussions within their parties about the potential outcome.

That looks likely to result in a Tory majority of between 20 and 35 seats in the House of Commons, officials from both parties said.

All Conservative candidates have pledged to vote for Johnson's Brexit deal, meaning even a small majority would in theory ensure Britain completes its divorce from the European Union by the Jan 31 deadline.

With just under a week to go before the vote, the outcome is still uncertain. While Johnson is winning where he needs to, many voters have not made up their minds while others could still change their decisions on who to support, the officials said.

Johnson triggered the Dec 12 snap election after months of deadlock over Brexit policy in parliament, where his Tory party didn't have a majority.

He wanted to force his deal with the European Union into law to ensure Britain left the EU by Oct 31, but lawmakers refused to agree to his fast-track timetable and forced him to request a delay.

Johnson has appealed to voters to give him a majority so he can "get Brexit done" - three and a half years after the referendum - and move on to the country's other priorities, including investing in the National Health Service and cutting taxes.

It's a message targeted particularly at voters in the north and centre of England, regions which voted to leave the EU in the 2016 referendum but which have traditionally heavily backed the Labour Party. 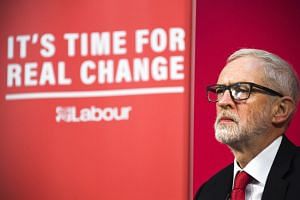 Many of these so-called "red wall" seats are now moving to support Johnson's Tories, according to polling, and to the officials in both main parties, who spoke privately about the contest.

While Johnson is on course to triumph next Thursday, the margin of error in polling - and the difference between a result that would deliver a landslide and one which would lead to another hung parliament - is small. That's because in Britain's "first past the post" electoral system, the winner takes all in each electoral district.

A summary of recent polls puts the Conservatives on 43 per cent of the vote nationally, and Labour on 33 per cent, a gap that has narrowed over the course of the campaign.

Tim Bale, co-director of the Mile End Institute at Queen Mary University of London, said the polls suggest next week's election will result in a Tory majority.

"At the moment it points to a Tory majority," Bale said in an interview with Bloomberg Radio on Friday. "Corbyn I think has very little time to close that gap."