The safety of high-rise buildings has come under scrutiny since the Grenfell disaster in June which killed 71 people. The British government, which ordered a series of tests to establish which types of cladding panels met fire safety rules, said those on the London tower block did not comply.

A Reuters review identified 65 other towers with cladding of a type that was approved by local building inspectors, but which government tests found did not comply with the statutory regulations. The towers were clad by major builders including French groups Engie and Bouygues, and Britain's Galliford Try, Forrest, Wates Group, Rydon Group and Willmott Dixon.

The Reuters review was based on publicly available building planning permission documents, which detail the work carried out and the materials used, as well as visits to the towers and statements from housing providers and builders.

For 29 of the buildings, the same builders that installed the cladding have won new contracts to remove or replace the panels, according to the owners of the buildings, who said they were paying millions of pounds for the work. The rehired companies are Willmott Dixon, Wates and Engie.

"Following the Grenfell tragedy, we have been supporting the relevant councils, and removed the cladding where requested. Our primary concern is to ensure all residents in these buildings are secure and safe," said an Engie spokesman.

In the wake of Grenfell, the government ordered an independent review into building regulations and fire safety, and the way the rules are complied with and enforced. The review is due to report its findings early next year. 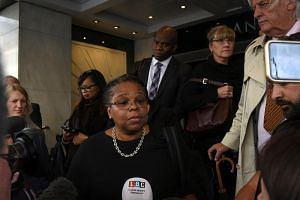 The 65 towers in question are owned by local governments - known as councils - or housing associations, which are publicly funded, non-profit bodies that provide housing intended for low-income people.

At the time all the panels were installed, building inspectors - usually council workers but sometimes staff of inspection firms licensed by councils - signed off the work as being compliant with safety regulations, according to the owners of the blocks and the building firms involved.

Chris Blythe, CEO of trade body the Chartered Institute of Building, said builders hired to carry out high-rise cladding projects used many subcontractors and advisers, and that this could lead to misunderstandings, with one party thinking another had ensured work was compliant.

"The business model we have is almost geared up for potential failure," said Blythe, adding that if fewer parties were involved, there would be less room for confusion over responsibilities.

For all 65 blocks identified by Reuters, the councils or council-licensed firms whose inspectors approved the work as compliant either did not respond to requests for comment or declined to comment while the independent review was ongoing.

The government has already acknowledged problems with the inspection process, with Fire Service Minister Nick Hurd saying in July there was a "system failure, built up over many years"in the area of regulation enforcement.

However a spokesman for the Department for Communities and Local Government (DCLG), which ordered the cladding tests and regulations review, said sign-off by inspectors did not absolve contractors of responsibility to meet safety standards.

Cladding systems are panels put up on the outside of buildings to improve their aesthetics and energy efficiency.

Since 2006, building regulations have required materials used in cladding on high-rise buildings to be able to pass the "BS 8414 test" which measures combustibility.

After Grenfell, the DCLG ordered a series BS 8414 tests to establish which types of cladding met fire safety rules. It said that, of around 600 social housing towers in England that had cladding, 161 had systems of a type that failed the tests. But it did not name the towers.

Reuters identified 60 blocks which, since 2006, had been cladded with aluminium panels with polyethylene cores - a form of cladding that failed the DCLG's test, and which the prime minister and three other ministers have said breaches safety regulations when used in tall buildings. Five other blocks, also cladded since 2006, had combinations of panel and insulation board that failed the test.

The three companies that were rehired to replace the cladding on 29 of the towers had all originally fitted aluminium panels with polyethylene cores.

Wates secured contracts with Westminster council in central London and One Manchester housing association to reclad 14 towers it covered in 2007 and 2010.

Willmott Dixon has received contracts from Oxford council and west London's Octavia housing association to replace panels it installed on three blocks early this year and in 2013.

Engie has been hired by Barnet Homes in north London to replace cladding on three blocks it clad in 2012. It also has a contract to remove cladding from nine blocks in Salford, north England, owned by the local council that it clad around 2016.

Engie has been hired to remove panels from 12 blocks it clad in 2012 and 2016, and install new cladding on three of them. The contracts are with housing associations Barnet Homes in north London, and Pendleton Together in Salford, north England.

The three building companies declined to comment on how much the contracts were worth.

However five of the six owners of the buildings told Reuters how much money they were paying for the work.

Salford council said it expects to spend up to 25 million pounds in total for the removal and recladding work on nine blocks. Engie has been hired to remove its original panels, but the recladding contractor has not yet been named.

One Manchester declined to comment on how much its recladding work would cost.

The building companies declined to comment on the figures.

Jonathan Raynes a partner with law firm Steptoe & Johnson said councils or housing associations who paid contractors for cladding that turned out to be non-compliant could sue the contractor for the cost of replacing the cladding.

"The contract will almost certainly have a provision that says the contractor must build in accordance with statutory requirements," he said, adding that if the contract didn't say this, a requirement to act legally could be deemed implicit.

Raynes and Adam Creasey, a solicitor with Lewis Nedas, said the fact building inspectors signed off on work did not remove the builder's responsibility to adhere to building regulations. Creasey added a builder could conceivably try and reclaim any money awarded against it from the body which provided the inspection sign-off.

Reuters contacted the owners of all 65 blocks with cladding of a type that failed the government tests - seven local councils and 10 housing associations - and asked if they were considering legal action against contractors to recover the money spent on cladding, or to cover the cost of replacement.

Only Camden council in north London said it was considering legal action. It declined to elaborate on its plans.

Oxford council said it had not sought money from Willmott Dixon over the original cladding and would only consider taking legal advice after the independent review was completed.

One Manchester said it would not talk about seeking recompense while the review was on-going.