POINTE-A-PITRE (AFP) - At least one person was killed as Hurricane Maria battered Guadeloupe, officials said on Tuesday (Sept 19), in the first confirmed casualty from the huge storm sweeping the eastern Caribbean.

The person was killed by a falling tree, the local administration said, while two more were reported missing after their ship sank off Desirade, the easternmost island in the French territory's archipelago.

The dead person "did not respect orders to stay inside", authorities said in a statement, adding that "several floods have been signalled" around Pointe-a-Pitre, Guadeloupe's largest city. 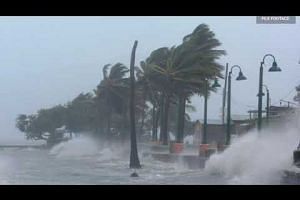 Dominica has lost ‘all what money can buy’ after Hurricane Maria: PM

Coastal areas around the capital Basse-Terre have also been "submerged".

"All of the archipelago's road networks have been affected by falling trees or branches," it said.

Little damage to buildings had been reported so far, though "some roofs have been ripped off".

Authorities said 40 per cent of households in the territory of some 400,000 had no electricity, and 25 per cent of landlines had been cut.

The US National Hurricane Centre described Maria as "potentially catastrophic" as it pushed north-west towards the Virgin Islands and Puerto Rico.