SINGAPORE - Pokemon fans here can now "catch 'em all" outside of the Pokemon games in their phones and gaming devices.

The first Pokemon Centre in Asia outside Japan opened its doors on Thursday (April 11) at Jewel Changi Airport as part of the latter's ticketed public preview. About 500,000 free tickets were made available last month for Jewel's public preview, which started on Thursday and will end next Tuesday.

The Pokemon Centre, which officially opens next Wednesday (April 17) when the Jewel opens its doors to the public, has up to 600 official merchandise items from plushies to stationery for fans to buy. Occupying a retail space of 212 sq m, or the size of half a basketball court, it will open daily from 10am to 10pm.

The Pokemon media franchise started as a video game in 1996 that is famous for its cute monster characters and the slogan "gotta catch 'em all".

The franchise expanded into manga and movies and has garnered more than US$90 billion (S$122 billion) in total revenue to date, making it the highest-grossing media franchise in the world. It has a large following in Singapore, with the mobile game Pokemon Go a hit when it was launched here three years ago.

The first Pokemon Centre outside Japan was technically in New York City. But it underwent renovations and became Nintendo New York, which sells Nintendo merchandise.

There are currently 12 Pokemon Centres in Japan, in locations from Tokyo to Sapporo. The Singapore branch is the 13th such store.

Mr Kenjiro Ito, chief business officer of The Pokemon Company, says that Singapore was chosen due to the huge success of a previous collaboration with Changi Airport Group (CAG) in 2016, as well as for its geographic location.

"Changi is a hub airport and a lot of people will come through. Those who purchase our goods will then move across the globe, which we believe will provide a wide range of publicity for us," he says.

Singapore's multiracial and multicultural roots is another factor.

"We wanted a space that will be well received by people from different cultures and backgrounds around the world," says Mr Ito.

Welcoming visitors to the Singapore store is a big figurine of the "water" Pokemon Lapras with the iconic Pokemon Pikachu riding on it. In a corner of the store, another giant water Pokemon Gyarados spouts water, a la Merlion.

Water Pokemon, such as Lapras and Gyarados, and grass Pokemon like Celebi, are chosen to represent the Singapore store, as the island is known for its beautiful sea view and greenery, says Mr Ito. 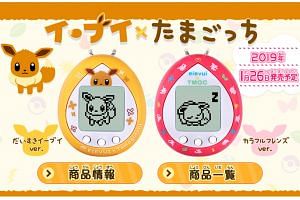 At some Pokemon Centres in Japan, there are also cafes and other entertainment avenues such as "gachapon" vending machines and arcade machines. However, there are no such facilities in Singapore.

But like other Pokemon Centres, the Singapore outlet has some exclusive merchandise. These include Pikachu plushies in the form of a pilot and cabin attendant with SIN initials, a Lapras name card holder, and a clear folder with the Singapore skyline and many Pokemon like Lapras, Pikachu and Celebi depicted together.

In addition, the Pokemon Centre Singapore features a touchscreen interactive Pokedex - a digital encyclopaedia that provides information about the various Pokemon. Visitors can tap and swipe to browse through the Pokedex to know more of their favourite Pokemon.