GLASGOW (REUTERS) – Kliment Kolesnikov of Russia set a world record for the 50 metres backstroke while winning the European Championship title in Glasgow on Saturday (Aug 4).

The teenager clocked 24.00 seconds to take 0.04 seconds off the record set by Britain’s Liam Tancock at the world championships in Rome in 2009.

Kolesnikov, who had been part of Russia’s 4x100 metres freestyle gold medal-winning quartet on Friday, powered down the length of the Tollcross International Centre pool to earn his second gold just a month after turning 18.

His performance was so dominant that he beat Romanian silver medallist Robert-Andrei Glinta, a former world junior champion, by 0.55 seconds.

“I said to myself to keep calm. I realised I could win after the semi-final yesterday but I didn’t think much about the world record,” Kolesnikov said.

Kolesnikov, who has long been tipped to lead the new generation of talented Russian swimmers, had already enjoyed a stellar career since earning his first international call-up in 2016 for Russia at the European Junior Championships.

There, he announced himself in spectacular fashion by breaking world junior records in both the 50 and 100 metres backstroke en route to the gold medals. 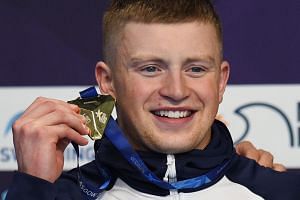 Swimming: Peaty out to 'dominate' after smashing 100m breaststroke record

Last year’s world championships in Budapest was his first senior international meeting which he marked by finishing fourth in the 200 metres backstroke while also setting two more world junior records.

Though he was evidently delighted, the youngster evidently has bigger fish to fry. “The big goal is the Olympics (in Tokyo in 2020). It is nothing special what I have done today, the special one is the Olympics.”