NAIROBI (AFP) - Kenyan police raided the country's Olympic headquarters on Saturday (Aug 27) probing a corruption scam that saw some of the nation's athletes deprived of team uniforms at the Rio Games.

Three top Olympic officials have already been arrested in the investigation, and the raid turned up dozens of boxes containing uniforms provided by sports goods manufacturer Nike that were destined to be worn by athletes at the Rio opening ceremony.

"The raid was conducted this morning and several dozens of cartons with the sports kits have been recovered," a police source told AFP.

"The investigation is centred on the misappropriation of Sports kits donated by Nike... and not given to the athletes."

The Olympic opening ceremony provides an occasion for delegations from all competing nations to march proudly in smart uniforms into the main Olympic stadium.

But at the Rio opening ceremony, the Kenyan team wore a mismatch of outfits because a number of delegates never got the official uniform.

Police earlier announced the arrest on Friday of Francis Paul, secretary-general of the National Olympic Committee of Kenya (Nock), his deputy James Chicha and Stephen Ara Sou, who headed the Kenyan delegation to Rio.

The three are implicated in the uniform scam and also face allegations of mismanagement of Kenya's Rio delegation.

The latest allegations come on the heels of a major drugs scandal that has dogged Kenyan athletics for years and resulted in dozens of competitors receiving lengthy bans.

The three officials, held at a police station in northeastern Nairobi, are due to be charged on Monday for theft of official sports gear as well as mismanagement, a police source said. 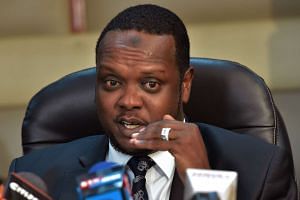 The Kenyan government on Aug 18 ordered a probe into the charges, notably the alleged theft of sports uniforms but also the presence in the Kenyan delegation of officials who had no function related to the Games.

The allegations of mismanagement and corruption had a direct impact on the Kenyan athletes at the Rio games - who nonetheless clocked up their best Olympics yet with 13 medals - including six golds - putting them in 15th place overall, the best by an African nation by far.

When javelin thrower Julius Yego, the world champion, turned up at Nairobi airport to head to the Games, he found out he was not even booked on a flight to Rio. He ended up winning a silver medal at the Games despite his travel hardships.

Kenya's Sports Minister Hassan Wario on Thursday announced the disbanding of the Kenyan Olympic committee after the allegations surfaced.

But secretary-general Paul, who is now in custody, said that Wario did not have the legal competence to disband the Nock, which is overseen by the International Olympic Committee, not the Kenyan government.

Wario himself has faced calls for his resignation, and on Wednesday he too was questioned in connection with the probe.

"Someone should pay the price," he said, as he called on Wario to resign.

"If you are the head of an organisation and you don't even know what is going on, my friend you are supposed to go home."

Kenya's Olympics was in trouble before the Rio Games even began.

The country's middle distance, long distance and marathon runners are world beaters, and enjoy huge international prestige and adulation in their own country. But doping scandals have tarnished their achievements.

The World Anti-Doping Agency (Wada) only cleared the country's athletes at the last minute to take part in the Games, after parliamentarians had botched the passage of a new law designed to convince world authorities that Kenya is serious about tackling the widespread doping that has seen at least 40 athletes banned since 2012.

Kenyan athletics coach and team manager Michael Rotich was ordered home from Rio and is facing court action amid allegations he demanded bribes to warn athletes ahead of doping tests.