The 35-year-old touched home in 21.40 seconds, becoming the oldest swimmer ever to win Olympic gold.

"I kind of laughed," Ervin said his reaction when he saw the result. "It's almost absurd I was able to do it again."

Ervin's return to the top step of the podium marks his career coming full circle. 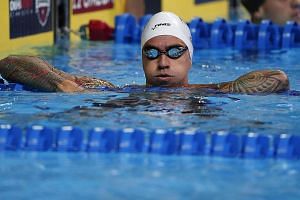 Inspiring return to life at the top

He battled with drugs and alcohol, and attempted suicide, after victory in his maiden Olympics in Australia. He called it quits aged 22 and stayed retired for eight years before rediscovering the passion for swimming.

Having auctioned off his first Olympic gold medal on eBay for US$17,101 (S$23,020) and donating the proceeds to a tsunami relief fund, he now has another.

"This medal means to me, the recognition, the immense gratitude for all the people that have supported me through the highs and the lows, always there for me, let me lean on them and I hope they can always lean on me if they need it," he said. "Most of them are beyond needing to lean on the likes on me."