The former world No. 1's eight bogeys included three in a row on the back nine as he battled to a five-over 76.

"I really didn't play well today," he said. "I missed every tee shot left and I did not putt well, didn't feel very good on the greens and consequently never made a run.

"I knew I had to make a run on that back nine, and I went the other way."

Woods had a 36-hole total of six-over 148 - four shots outside the projected cutline as darkness fell and 13 shots off the pace set by McDowell and Cantlay.

McDowell opened his five-under par 66 with three straight birdies at the 10th, 11th and 12th. He followed that with back-to-back bogeys but grabbed four more birdies to surge up the leaderboard. 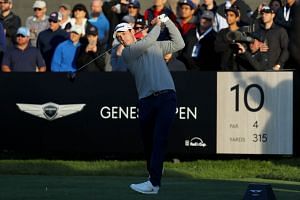 American Cantlay, a former top-ranked amateur who shared the overnight lead with Tony Finau, had five birdies in his 69.

He launched a string of three straight birdies with a near hole-in-one at the par-three sixth, his 15th of the day.

American Sam Saunders was seven-under with three to play when darkness fell with a handful of players on the course.

Ryan Moore closed out a three-under 68 in the fading light to reach the clubhouse on six-under 136.

Former US Open winner McDowell has just one top-10 finish worldwide in the past 18 months. Without a victory since 215, he has plummeted to 219th in the world rankings and arrived at Riviera off three straight missed cuts to start the season.

He said his game for the past several months had been much better than those results indicated.

"All I'm missing is a couple little numbers and a little bit of confidence," the Ulsterman, who won the 2010 US Open at Pebble Beach, said.

"I'm really excited to be going into the weekend of the tournament on the business end of things."

Woods has no such weekend excitement to look forward to.

The southern California native grew up playing Riviera, and indeed played his first US PGA Tour event here as a 16-year-old in 1992.

But he's never won in 11 prior appearances, and hadn't teed it up on the classic course west of downtown Los Angeles in 12 years.

It was always going to be a tough proposition in the second tournament of his latest comeback bid - three weeks after he finished tied for 23rd at Torrey Pines.

This week the missed fairways were joined by plenty of missed greens and, on Friday, missed putts.

"I didn't feel very good when I was warming up with my putter," said Woods, who had three three-putts on the back nine.

Iron shots 'not there'

Making matters worse, he wasn't giving himself many comfortable looks.

"All the spots you're supposed to not miss it in, I was putting it in," Woods said. "That was frustrating, because I knew where to hit it and I wasn't able to hit it there.

"My wedge game is fine," he said. "But my normal iron shots that I've always dialled in for much of my entire career, it's just not there."

Woods said the real cure is more tournament play. On Friday he committed to next week's Honda Classic in Florida, his decision to play back-to-back weeks a testament to his faith in his hard won fitness.

"I've just got to play more tournaments," he said.

While Woods' weekend duties are reduced to those of tournament host, with his TGR Foundation the charitable beneficiary of the event, a bunch of players remain in the hunt.

Twenty-three players are within five strokes of the lead. That includes four-time Major winner Rory McIlroy and Justin Thomas, who both played alongside Woods.

World No. 4 Thomas, whose five victories last season included the US PGA Championship, carded an even par 71 while McIlroy signed for a 69. They were both in a group of 10 sharing 15th place on two-under.

"It's sort of anyone's tournament right now," world No. 10 McIlroy said. "Thirty-six holes around here, it's a lot of golf."