He has finally established himself as a first-choice centre-back for both club and country this year but it has been a period of accelerated learning for Madhu Mohana.

Tonight, Madhu will be the LionsXII's main defensive asset against Pahang's deadly duo of Dickson Nwakaeme and Matias Conti in the first leg of the Malaysia Cup quarter-finals.

With coach Fandi Ahmad looking to play an attacking game in Kuantan, Madhu will be tasked with keeping the gates locked against a Pahang side that won the last two editions of the Malaysia Cup. 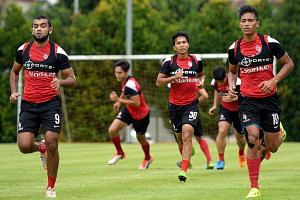 Nizam's return a boost for LionsXII

But the 24-year-old is keen on the challenge, saying: "I think they (Nwakaeme and Conti) are definitely two of the best strikers in the Malaysia Cup.

"They are physically very strong, technically very good. We need to close them down quickly and help each other in the team to do that.

"It's an important task especially for us defenders. We need to prevent them from scoring."

For starters, Madhu will need to stop the duo from adding to a sad statistic for the LionsXII - Nigerian Nwakaeme and Argentinian Conti have each taken turns to score against Fandi's side in their last four previous meetings.

And both players have enjoyed a glittering Malaysia Cup record. Conti scored the winner in the 2013 final (beating Kelantan 1-0), while the powerful Nwakaeme netted a brace in last November's final against Johor Darul Takzim (JDT) before Pahang triumphed in the penalty shoot-out.

But Madhu will use the experience he gained from the past two international matches. He struggled to cope with Japan's firepower and in the loss to Syria, he was sent off for an off-the-ball altercation with Kharbin.

The defender said: "We had a lot of difficulties and it was two tough games. But it has benefited us a lot.

"I learnt to be patient and I can't really go in blindly for the tackles."

He feels that the key to upsetting the two-time reigning champions is to keep their defence tight.

"If we don't concede any goals for this first leg, I believe we can go through."

Fandi's players will be buoyed by the recent sluggish form of their opponents. Pahang, who finished second in the Malaysian Super League, suffered a pair of shock 1-4 losses to second-tier Malaysian Premier League sides PKNS and Penang in the Malaysia Cup's group stage.

And the former Singapore captain, who masterminded a 2-1 win in Kuantan in last year's Malaysia Cup group stage, is quietly confident of shocking the holders.

He said: "We have beaten them (Pahang) before over there, so I'm sure that the players know how to face them and beat them."

Suffice to say, Madhu will be a key figure in Fandi's plans to create an upset.

A version of this article appeared in the print edition of The Straits Times on November 24, 2015, with the headline 'Madhu to be key in defence'. Subscribe
Topics:
More
Whatsapp Linkedin FB Messenger Telegram Reddit WeChat Pinterest Print Purchase Article Copy permalink