LONDON (AFP) - Ole Gunnar Solskjaer insisted on Saturday (Aug 3) he has "no doubts at all" that Paul Pogba is committed to Manchester United.

French World Cup winner Pogba was missing from the United squad for the pre-season penalty shootout win over AC Milan in Cardiff.

However, United coach Solskjaer insisted the star's absence was due to a "back spasm".

When asked if Pogba was set on staying at United, the Norwegian said: "I've no doubts at all.

"I wasn't expecting him (on the plane to Cardiff). I spoke to him after training and he didn't feel right.

"Paul will probably be back early next week training. It's not an injury, he just felt some pain. We didn't want to risk anything this weekend and he should be OK for Chelsea next week."

Pogba ignited fierce speculation over his future in June when he said "it could be a good time to have a new challenge somewhere else". 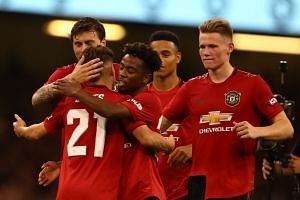 Football: James keeps his cool to give Man United victory over Milan

Meanwhile, the United boss said the £80 million (S$130 million) deal to bring England defender Harry Maguire from Leicester was close to a conclusion.

"Hopefully, the last little details will be in place, so we can announce something very soon," Solskjaer said.